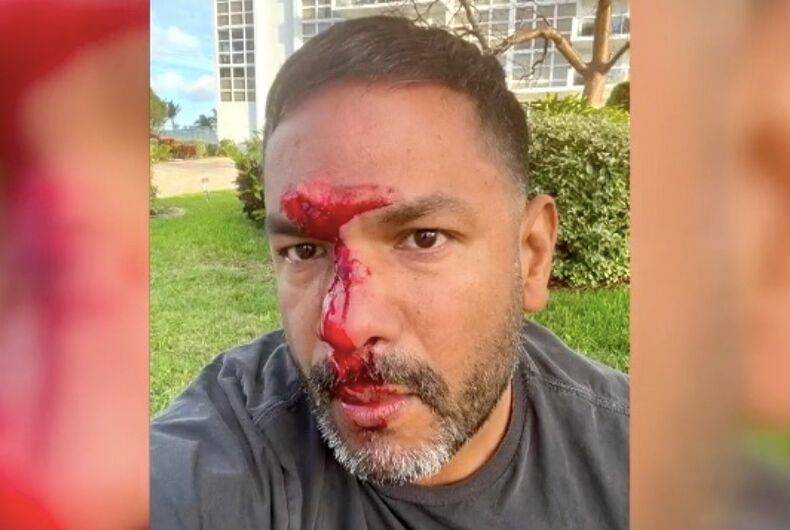 When James Garcia walked his dog, Delilah, in Fort Lauderdale, Florida on Sunday morning, he heard screaming; so he walked down the street to take a closer look. He soon encountered a stranger who asked if he was gay. When Garcia answered yes, the man allegedly punched him, leaving Garcia laying on the ground with broken bones and a bloody face.

Garcia couldn’t dial the police on his cell phone because of the slippery blood covering his hands. Instead, a passer-by did. By Tuesday, the Fort Lauderdale Police Department arrested Maurice Antwan Charles, a 36-year-old man, as the suspected attacker.

The alleged attack left Garcia with two facial fractures as well as cuts and bruises that required 10 stitches. He went to the hospital for treatment. Charles is now facing an aggravated battery charge.

It’s unclear if prosecutors will charge Charles with a hate crime. Though hate crime charges can enhance an attacker’s sentencing, the charges also raise a prosecutor’s burden of proof to show that the attacker was clearly motivated by an anti-gay bias.

In 2020, Florida reported 22 hate crime attacks based on sexual orientation, according to the U.S. Department of Justice. The number of such attacks decreased from 35 in 2018 to 27 in 2019. However, the actual number of homophobic attacks in the state is likely higher, since some survivors don’t report their attacks for fear of retaliation or harassment by anti-gay police officers.

Garcia said that the trauma he experienced will last for a while.

“When I close my eyes, I see this attacker every day,” Garcia said. “I hear his voice. I see his face.”