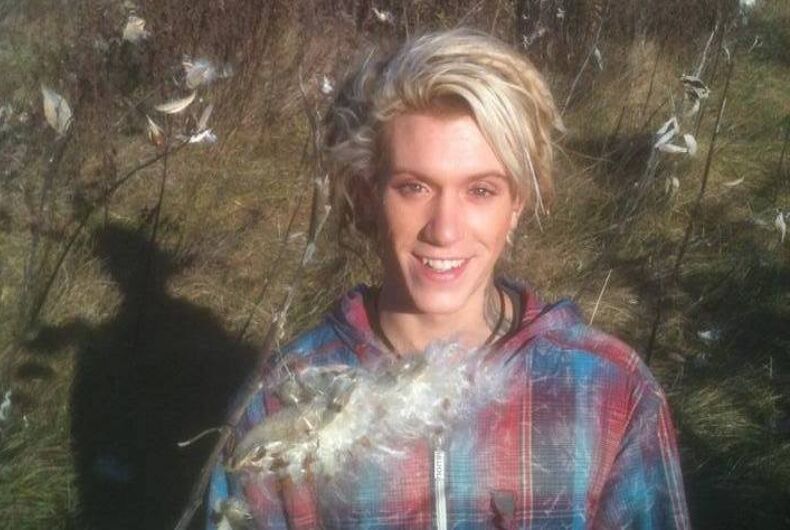 Fern Feather, a 29-year-old transgender woman living in Vermont, was stabbed to death and left to die on a Morristown roadside on Tuesday morning.

The lead suspect, 43-year-old Seth Brunell, claimed self-defense, saying that Feather made a sexual advance and attacked him. But Vermont State Police investigators found no evidence of a struggle, an assault, or any weapons on Feather. Brunell has been charged with second-degree murder and is being held without bail.

Related: Young people are coming out in huge numbers. These families found beautiful ways to support their kids.

Investigators said that Feather and Brunell met and began spending time together a few days before her death. Police encountered the two in a car the morning of Feather’s murder. About two hours later, a passer-by found her bleeding body on a roadside. First responders declared her dead at the scene.

Feather’s death is the 11th murder of a trans woman this year, according to the Human Rights Campaign. Her murder has occurred just as Republicans nationwide have sought to ban trans people from playing school sports, accessing gender-affirming care or having their identities mentioned in the classroom — all of which, Republicans claim, are forms of child abuse and misogyny.

“The community is outraged and devastated by this violent act,” said Aliena Gerhard, the Deputy State’s Attorney for Lamoille County. “We will pursue it fully and we will make sure justice is served. This type of crime just shakes everybody and I would just ask the community to know that you are in very safe hands here.”

In a late March Facebook post, Feather wrote, “It’s time to tell the world I’m a Hot Trans Woman in a currently male Hot Body Suit !! dang sure took long enough eh ?! Please share this to liberate our other beautiful ones!” She was also a member of the local radical faerie community, a group that seeks to define queer community consciousness through creative, open-hearted spirituality.

Feather’s friend, Suzanne P., told PGH Lesbian, “Fern was part of my sweet, weird, fun-loving Salt Café family. We dressed however we wanted — Fern in flowery garb with feathers in their hair… [she] was the best at making citrus plates: they’d form mandalas of the fruit slices… Fern ‘invented’ mushroom-stuffed-mushrooms, and was delighted when it was the week’s most popular item.”

Brittany Tetlow, another friend, told WPTZ, “Every time I saw Fern, they had a wildflower in their hair. But they didn’t need the accessory, they were a wildflower themself. Always in full bloom. Bringing joy and happiness to everybody around them…. When we’d go out to anywhere if anyone was silently suffering, Fern would go over to them and make them feel important and make them feel valued.”

People’s Pride Vermont, the state LGBTQ organization, wrote, “Local news outlets have begun coverage, predictably deadnaming and misgendering her, as well as universally avoiding the phrase ‘Hate Crime’… Brunell, has attempted to exploit the age-old transmisogynistic specter of sexual aggressiveness to wriggle out of taking responsibility for his brutal actions…. His claims fit the narrative creeping across our state, our nation, and our world, and as such will be a suitable excuse in the eyes of many.”

Vermont state House Speaker Rep. Jill Krowinski, (D) said Feather was “tragically taken from this world too soon, like so many other transgender people who are targeted in bias driven attacks,” according to VTDigger.com. “We absolutely need to continue to take steps to make Vermont a more equitable place and be clear that hate has no place in our state.”

Democratic state Senator Kesha Ram Hinsdale said she was “holding our trans community in my heart” after Feather’s death.

“Exploiting fear and targeting divisive rhetoric at people who are just trying to be who they are is hateful and can lead to violence,” he said. “To Vermonters in the LGBTQA+ community, I want you to know we stand with you and support you but know we have more work to do.”

While gay and trans panic defenses don’t often work in court, they continue to be used by murder and assault suspects. Such defenses blame queer people for their own murders by claiming that they provoked their attackers. Such defenses also play off societal queerphobia and reinforce negative stereotypes of queer people as sexual predators.

While some state laws have sought to ban such defenses from courts, those laws just instruct jurors to “ignore bias, sympathy, prejudice or public opinion” when deciding their verdicts. The bans also educate district attorneys’ offices about strategies to prevent queerphobia from affecting trial outcomes.

A woman sued after a cop forcibly baptized her. Now she’s dead.