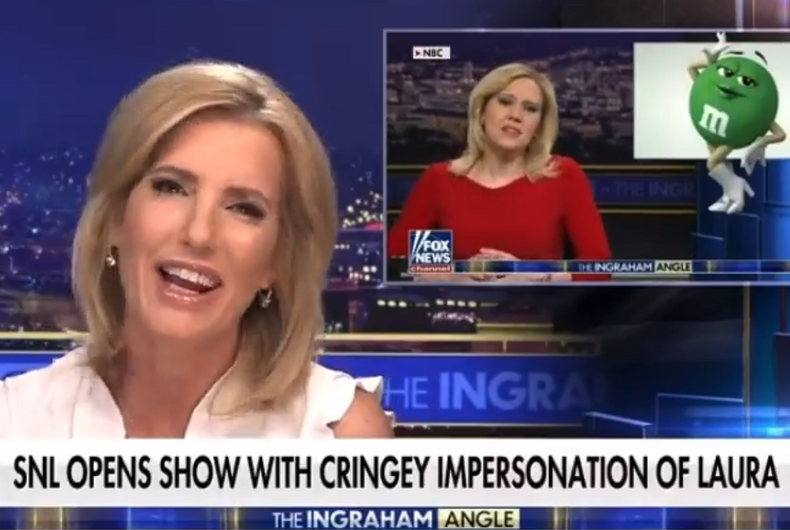 Laura Ingraham's show has been a source of anti-LGBTQ rhetoric on Fox NewsPhoto: Screenshot

LGBTQ staffers and allies at Fox News are speaking out now that their employer has turned to harsh anti-LGBTQ rhetoric to defend Florida’s Don’t Gay Say law and other anti-LGBTQ legislation in states across the U.S.

Fox Pride, the company’s LGBTQ employee networking and resource group, is speaking out on the corporate Slack, an internal communication platform used by businesses.

“Fox Pride denounces statements made regarding sexual orientation and gender identity on FOX News in the past week,” the group wrote in a statement obtained by The Daily Beast. “While the internal support and resources Fox Corp. offers to LGBTQ+ employees are amazing and supportive, the public facing messaging and rhetoric is the opposite. We find it disheartening and a step backward in the acceptance of the LGBTQ+ community.”

“FOX News is one of the most watched cable networks in the nation and we must be mindful that the impact these words have on the LGBTQ+ community—especially youth,” the statement continued. “LGBTQ+ youth have the highest rate of suicide and words matter. Hateful words and generalizations about sexual orientation and gender identity have a direct impact on people’s lives. We are working to address and make sure our voices are heard.”

Fox Pride’s passionate response has been fueled by an ongoing litany of biased reporting and misinformation, pushing its members to the breaking point. Fox News editor Tyler O’Neil recently published a piece featuring a congressional candidate claiming Disney’s LGBTQ agenda may psychologically damage children. At the same time, the co-hosts of Fox & Friends suggested in a recent episode that Disney is making people identify as LGBTQ.

“We can no longer allow Fox Corporation to maintain its score if Fox News personalities and contributors continue to deny the existence of transgender people, minimize the violence transgender individuals face, refer to parents of LGBTQ+ youth as perverts, or equate leaders of LGBTQ+ diversity and inclusions efforts with sex offenders,” Fields added.

When asked for comment, Fox Corp.’s public relations team stated, “We are fully committed to freedom of speech and freedom of the press because we know these precious rights as well as diversity of thought and opinion benefit us all.”

Apparently, that includes recent hire out Olympian Caitlyn Jenner, who chimed in on Fox Business saying, “I am a big supporter of [Florida Gov.] Ron DeSantis and what he’s doing… I have a very large family, raised a very large family, have a lot of grandkids, and I have been in control of my children’s destiny and what they’re going to learn in school, not some math teacher teaching my kids about gender identity. I can teach those lessons.”

Despite what appears to be a conflict of interest between its employees and public-facing presence, one insider anonymously commented, “The thing is, internally, the company values diversity. They invest in it and foster it from a management perspective. The on-air Fox News product, however, spits in the face of it. The employees are getting sick of it.”