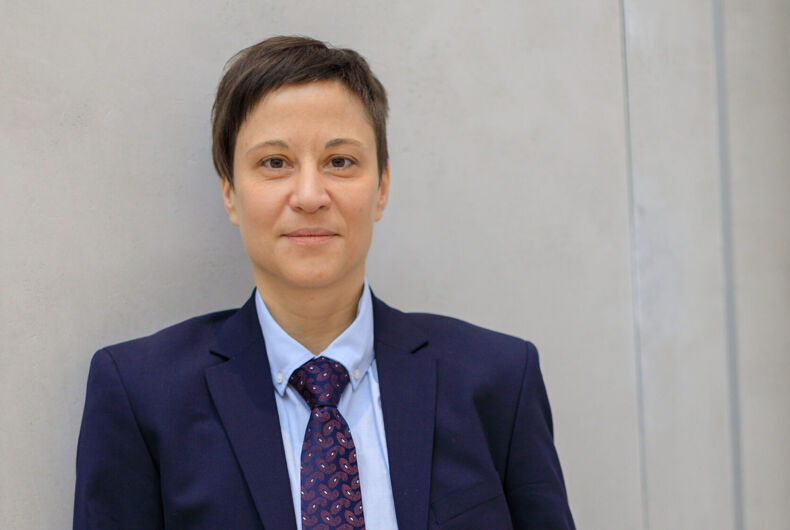 Related: Meet the gay Ukrainian men willing to go to war for their country

In saying it a second time, the context, the meaning, the reality of the word became clear.

According to Emson, the LGBTQ community in the Ukrainian capital, and as an extension across the nation, was overlooked, forgotten in the days after the Russian terrorists invaded the nation.

Yet, for the patriotic, bi-gendered leader of Kyiv’s LGBTQ community, this realization, although frustrating, spurred him/her and Kyiv Pride to find solutions that would help save these vulnerable lives.

February of 2022 began full of promise. Emson was in Canada, preparing to spend the month celebrating both his/her third wedding anniversary and birthday.

Then the war began, and although Emson could have stayed in North America (his/her wife is Canadian) that wasn’t Emson’s calling.

Emson arrived to a hellish nightmare.

“The nation was under attack. So as Ukrainians, we all had to focus on our nation’s well-being, but as the Director of Kyiv Pride, I had an additional responsibility. Our needs weren’t being met. We’ve made a lot of progress, but during the invasion, the health issues, the safety issues that are part of our community, weren’t being addressed. We had to address them from within.”

Recounting the first Kyiv Pride march, which took place in 2012 and had around 100 attendees, Emson shared what had already been overcome in the past and why she_he believed that no obstacle was insurmountable.

“As we prepared for that first gathering, the police basically said good luck, and that we were on our own. They couldn’t, they wouldn’t protect us,” Emson’s demeanor then perked up. She_he  continued, “and last year we hit 7,000 people and the police and members of the military marched with us. So we understand challenges, and we understand how to make things happen.”

Making things happen meant creating a war time infrastructure that sprang from the ground up.

“Some of the staff stayed in the city, some we told to go, for medical or family reasons. Then we had volunteers to call on, a database of more than 100, and to ask for donations of time, money, supplies, anything they could offer, and we also reached out to partner organizations in cities like Kharkiv and Odessa and activated connections that allowed us all to be stronger. We understood, we understand, that sacrifices of the entire nation meant no one was coming to save us.”

Through the use of their own website where they receive financial donations and the group’s Facebook page, the result thus far has been staggering.

Thousands of LGBTQ residents fed and sheltered around the nation, housed in bunkers and provided for, within areas that are solely for those who are not cishet identifying.

In explaining some of what is being accomplished, Emson pointed to the transgender community.

“We have such unique needs, and if you look at trans people, their medical situation is so important. Even during war time, we are finding friendly doctors, who are welcoming Ukrainians on the gender spectrum even during this period of genocide and terror.”

Emson said aloud what is often whispered about.

“Yes, the Russians will rape us, mutilate our genitals, murder us. We aren’t human to them; we are less than human to them. That’s why during this time when the Ukrainian Army is protecting our nation, we must do our part to protect ourselves.”

In looking at the future of Kyiv Pride and the LGBTQ life in Ukraine, Emson ticked off the accomplishments of the last 10 years.

“The former President signed a decree recognizing us. The LGBTQ military members march with us. We grew from 100 to 7,000. Before the Russian invasion, we were even working on presenting a bill to parliament that would legal gay marriages, although during the current time, all of us understand that this legislation will be postponed. Progress is being made, absolutely. I also understand though that we can’t just think we have achieved equality. We are listened to now, we must make certain this isn’t taken away, as we build toward full societal integration.”

With Pride month approaching and festivities on Ukrainian soil likely nonexistent, Emson signaled his/her own call to action with a plea for solidarity.

“I’m asking every Pride organization, every LGBTQ organization across the United States, and the world, please reach out to us. Please, please carry our flag, please carry our banners, please keep us in your minds and hearts during your parades. We need money, we need any help, but we need more than anything to not be forgotten during the long road ahead. The war isn’t over, it’s not ending, and in June a show of unity is needed.”

Leading a community that is invisible now and at risk of being forgotten in the future, all while making sure its members are kept alive. This is the life of Lenny Emson, Director of Kyiv Pride, during war and beyond.