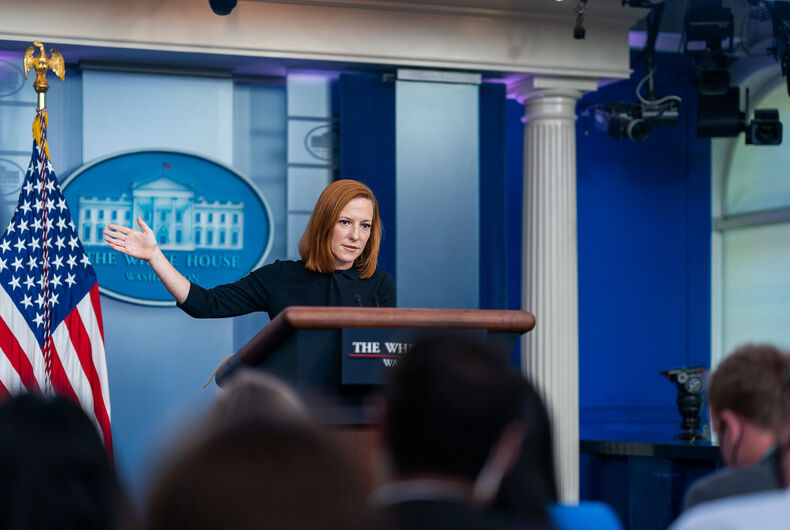 White House Press Secretary Jen Psaki was forced to explain to a CBS journalist why President Joe Biden hasn’t started World War III with Russia, which is the country outside the U.S. with by far the most nuclear warheads in the world.

“Why shouldn’t the images of the atrocities from Bucha compel a worldwide, unified coalition kinetic response?” asked Steven Portnoy at yesterday’s White House press briefing, referring to the massacre of nearly 300 people in the city of Bucha, Ukraine.

“You mean a military war?” Psaki asked. “Tell me more about what you mean.”

“Sure,” Portnoy responded blithely. “A military response led by the United States and the international partners.”

“As in bringing military troops on the ground from the United States and NATO?” Psaki asked, still not sure how serious Portnoy was.

“Well, the president has described ‘outrageous’ things,” Portnoy pressed. “You’ve called them atrocities. You’ve said, perhaps ‘We should brace ourselves’ for worse. Why not?”

And that’s when Psaki explained that the U.S. and NATO going to war with Russia would make things worse.

“It is to do everything in our power to hold them accountable; to support efforts through international systems to do exactly that; and to provide military assistance, security assistance, and support to the Ukrainian people and the Ukrainian government. That’s exactly what we’re doing.”

“But it is not in our interest or in the interest of the American people for us to be in a war with Russia,” she said before moving on to the next question.

Steven Portnoy of CBS News asks Jen Psaki why the US isn't calling for a world war against Russia at this point pic.twitter.com/NVbnGNavA9