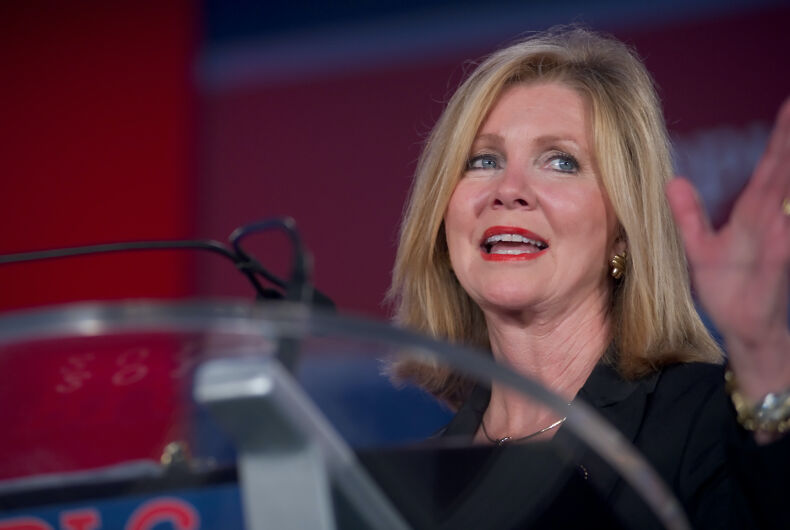 Sen Marsha Blackburn (R-TN) tried to trip up Supreme Court nominee Ketanji Brown Jackson last week by asking her for “a definition for the word woman.” When Jackson replied, “I can’t. Not in this context, I’m not a biologist,” Blackburn then complained about states that allow transgender students to participate in school sports.

But it turns out that many Republican Congress members can’t define the word themselves, either at all or in a way that isn’t bizarre.

The following day, Sen. Ted Cruz (R-Texas) told Jackson, “I think you are the only Supreme Court nominee in history who has been unable to answer the question ‘What is a woman?’”

When The Huffington Post asked Blackburn to define the word, she refused three times over. Her spokesperson eventually wrote the publication that her definition of a woman is “Two X chromosomes.”

Cruz responded that a woman is “an adult female human,” adding “a Homo sapien with two X chromosomes.”

Sen. Lindsey Graham (R-SC) took the circular approach and said a woman is simply someone who is “biologically a woman,” adding, “The birds and the bees stuff ― it’s been a while, but I think I remember the general gist of the differences. To have a hard time answering, that question is kind of odd to me.”

Sen. Mike Lee (R-UT) said a woman is “An adult female of the human species.”

Sen. Josh Hawley (R-MO) replied, “Someone who can give birth to a child, a mother, is a woman. Someone who has a uterus is a woman. It doesn’t seem that complicated to me.”

The aforementioned publication asked Hawley if a person who had her uterus removed would still be a woman. He said, “Well, I don’t know, would they?… I mean, a woman has a vagina, right?”

Approximately 600,000 hysterectomies are performed annually in the United States, according to the Women’s National Health Network. Also, some women are born without vaginas, even if they have two X chromosomes.

Members of the U.S. House of Representatives aren’t faring much better. The far-right Rep. Marjorie Taylor Greene (R-GA) recently tried defining “woman” at a meeting of the  Georgia Republican Assembly.

“I’m going to tell you right now what is a woman. This is an easy answer,” she said. “We came from Adam’s rib. God created us with his hands. We are- we may be the weaker sex… we are the weaker sex. But we are our partner’s, our husband’s wife.”

Some intersex and transgender women are born with a “tallywhacker,” but these Republicans aren’t actually interested in the biological complexity behind gender. They’re also not interested in upholding women’s sports. They’re just interested in demonizing trans people to get the support of right-wing voters, even if their hateful words and transphobic policies cause harm to real people.

A recent poll conducted by Morning Consult on behalf of The Trevor Project found that 85 percent of transgender and non-binary youth, and two-thirds of all LGBTQ youth, say recent debates about anti-transgender state laws have negatively impacted their mental health.

LGBTQ image of the week: Medellín holds vigil for 6 victims of hate crimes so far this year