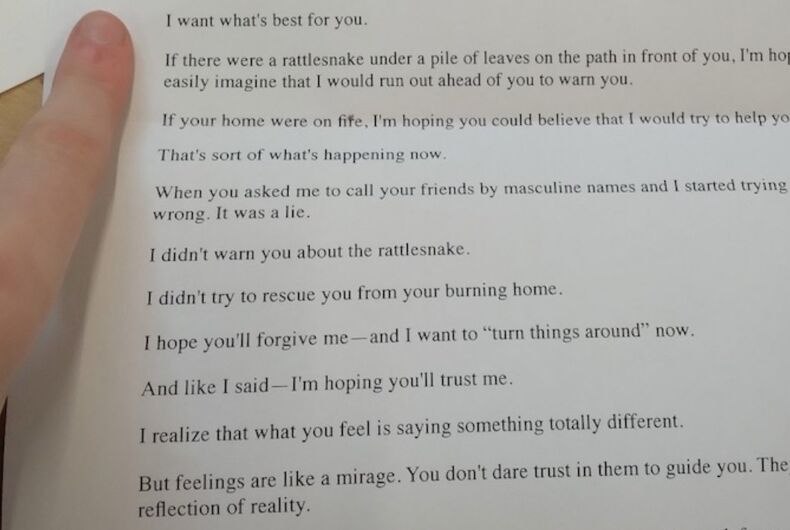 A portion of the note sent to students by a South Dakota high school German teacherPhoto: Screenshot

A South Dakota German teacher is being widely criticized after sending four high school students a note along with candy and a DVD to explain why he couldn’t support and respect their transgender friends.

In the letter, Hillesland tells students that he has decided to stop using the correct pronouns for trans students, claiming that he is “protecting” the students from “a lie.”

Watertown School District officials rushed to put out a statement distancing itself from the teacher after Hillesland letter went viral on Twitter, but they won’t pull the teacher out of the classroom.

“The Watertown School District does not support this sort of action, and we respect the rights of our students to be who they are,” the district’s statement read. “We want to provide a safe learning environment for all students. We continue to work through the situation and ask for your support as we handle it.”

“The administration has notified the students and their families that we are investigating the situation and assessing what has happened,” Superintendent Jeff Danielsen told local news. “We are still in the court of determining what course of action we should take.”

So far, school officials’ actions have not met parents’ or students’ expectations.

“It was akin to talking with a politician,” the mother of a trans student said about her meeting with the school principal. “He was dancing around the issue and would rationalize it as generational and religious. I don’t feel like anything was addressed. It sounded like he was defending a friend.”

She said her child had been bullied repeatedly at the school and nothing had been done to end it.

“We were all flabbergasted. Mr. Hillesland was always the nice teacher who always said hi to everyone, but he’s lost all my respect,” another student said.

“I felt more disbelief than anything else,” another mom added. “These people are in place to protect our children, and that’s not what’s happening. This is a pre-meditated attack, that he had to type up the letter. I don’t understand how that is allowed, and he is still teaching at the school today.”

“We are handling this as quickly as possible,” Danielsen said. He did not say when the district would make a decision on how to handle the situation.

The letter the teacher sent is reprinted in full below.

I am hoping that by now you know me well enough from class to be able to trust me.

I want what’s best for you.

If there were a rattlesnake under a pile of leaves on the path in front of you, I’m hoping you could easily imagine that I would run out ahead of you to warn you.

If your home were on fire, I’m hoping you could believe that I would try to help you get out.

When you asked me to call your friends by masculine names and I started trying to do that, I was wrong. It was a lie.

I didn’t warn you about the rattlesnake.

I didn’t try to rescue you from your burning house.

I hope you’ll forgive me—and I want to “turn things around” now.

I realize that what you feel is saying something totally different.

But feelings are like a mirage. You don’t dare trust in them to guide you. They’re not an accurate reflection of reality.

So what is the reality? What is the truth? How can you know the truth for certain?

Well, biologically, every cell in your body is ♀ —female—feminine. That’s the bilogical truth. The same is true for your friends.

And it’s the truth that I want to encourage you to pursue. That’s what a good teacher does, right?

The DVD will explain everything more clearly than I can—the spiritual as well as the scientific facts. The candy is a symbol of the sweetness that hope and pray you’ll discover.

South Dakota. Zero days without being a national embarrassment. Local teacher at the high school thought it was a good idea to hand this letter to several students. pic.twitter.com/BjnJx4dLdG