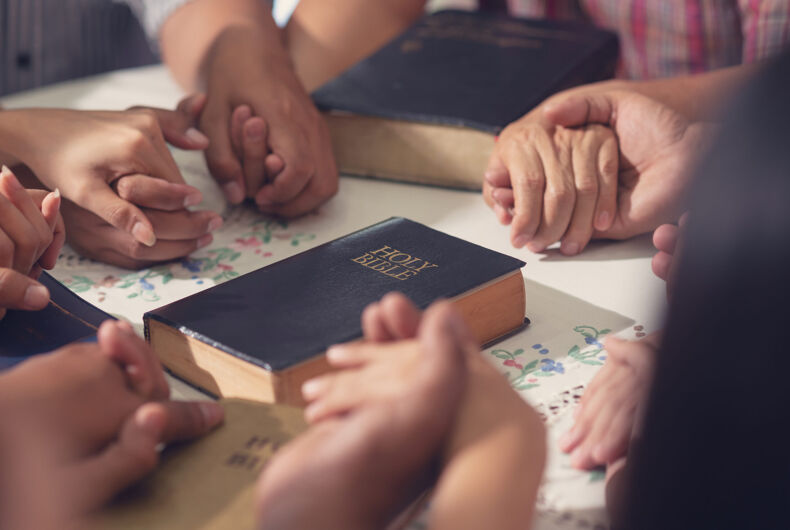 Fans of the Christian TV show The Chosen were upset after vandals defaced dozens of billboards advertising the show. Little did they know, the show’s creators had them vandalized as part of a marketing campaign to make it seem like Christians are oppressed.

The show, which follows the life of Jesus, erected 70 billboards nationwide right before Easter weekend. Shortly thereafter, 48 of the billboards were defaced with red and white paint declaring, “The Chosen sucks,” “The Chosen is boring.”

The neat, legible graffiti and adolescent messages should’ve been a clue that something was up. One “vandalized” billboard encouraged people to “Binge kale” and another read, “Come watch poopy butts.” The “vandals” also drew glasses, mustaches and frowns on the faces of the show’s characters.

One of the billboards even got graffiti signed “Me! (the Devil).”

The graffiti always mentioned chosensux.com, which lead to a website called “The Chosen is Not Good.” The website had a well-produced video featuring the Devil himself scheming with a class full of student demons on how to get people to stop watching the show to lessen its positive impact.

In the video, the students slowly upset the Devil by admitting how much they actually enjoy the show, despite his comparing it to a boring “Sunday school video.”

“Our core fans, when they first saw those billboards, got really upset,” said the show’s creator, Dallas Jenkins, according to Slate. “They were calling billboard companies and going online to really criticize the dastardly people behind it.”

One fan called the vandalism “blasphemy.” Another wrote on Facebook that the graffiti had made “a mockery of Jesus” by defacing his image. Yet another said that the vandalism had made them “furious beyond words” and made them cry because “our world is so lost.”

Jenkins eventually apologized to fans in a video message, admitting that the hoax was “part of our passion to reach a billion people with the authentic Jesus.”

Jeremiah Smith, a vice president with the show, said the show’s marketing team defaced the billboards to grab the attention of potential viewers who traditionally reject religious media.

“You guys missed the mark on this,” one wrote. “The billboards are distracting, evil, and wrong. The Lord would not stoop to cheap gimmicks to promote His Good News, His Gospel.”

Nevertheless, the show’s creators said that their stunt worked, expanding the series beyond its 350 million views. A number of Christian and local news outlets also wrote about the incident, giving the show free publicity.

The 7 most famous LGBTQ Jeopardy! contestants