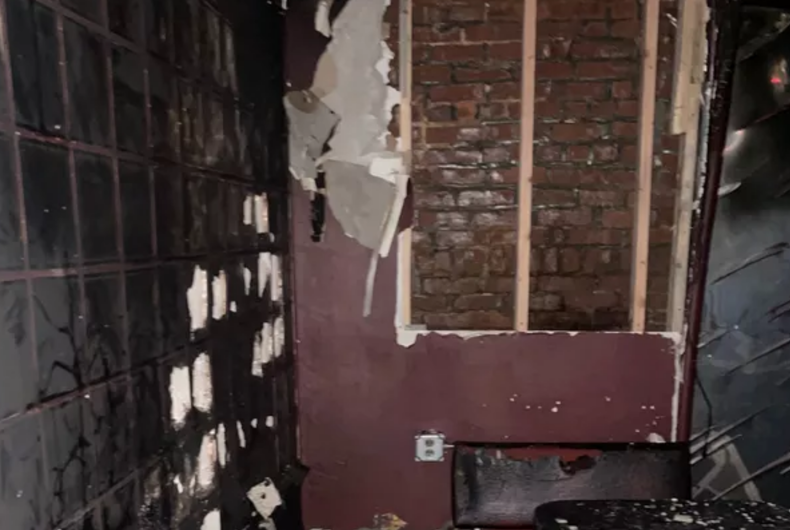 Two people were injured in a suspected arson attack at a Brooklyn bar that caters to the LGBTQ community.Photo: Screenshot

Police are investigating a suspected arson at LGBTQ nightclub Rash as a possible hate crime. The fire, which broke out an hour before the start of an even featuring queer and trans performers, injured two people and caused significant damage to the venue.

Surveillance footage from April 3 shows and unidentified individual pouring a substance on the floor and then setting it alight. According to Patch, police also have video of the suspect filling up a canister with gasoline.

“Last night before the party started, someone came into our bar, poured gasoline on the floor causing an explosion that set the bar in flames,” the bar’s owners wrote on Instagram. “He was wearing a dark hoodie and a backpack and immediately ran from the scene. Everyone inside made it out, but two people were brought to the hospital and are in stable condition.”

Co-owner Claire Bendiner told NBC New York that she had just stepped outside of the bar when patrons starting rushing out to escape the fire.

“The side door has a glass front and I looked over and saw flames to the top of ceiling. It was crazy, it happened so fast,” she recalled. Despite the chaos of the moment, one thing stood out. “He left the gas canister inside. Kind of calmly placed it on the bar counter. Wasn’t knocked over or anything.”

In the short time the fire raged, it left the bar unrecognizable. Co-owner Jake Sillen told Resident Advisor that the flames left the main floors “unsalvageable” and also caused damage to the basement and second floor.

One of the victims, bartender Tyler Glenn, suffered second-degree burns. They told Gothamist they initially thought the smoke was coming from a fog machine.

“Then I realized I couldn’t breathe,” Glenn said. “The whole thing was in flames. I was banging on the walls and I couldn’t find the door and I could feel myself about to pass out.”

“We still don’t know what to make of this cruel act of violence,” the owners wrote. “In only five short months we were privileged to become home to such a talented and vital community of artists. It breaks our hearts that anyone would seek to threaten that for any reason.”

Among those scheduled to perform that night for CHAOS CTRL were DJ Haram, Bambi, and Vesolo.

The bar has launched a Gofundme page to support those who were injured, to keep bar staff afloat during the closure, and to ultimately repair the space.

A gay 18-year-old was killed by police. His family still doesn’t have answers.