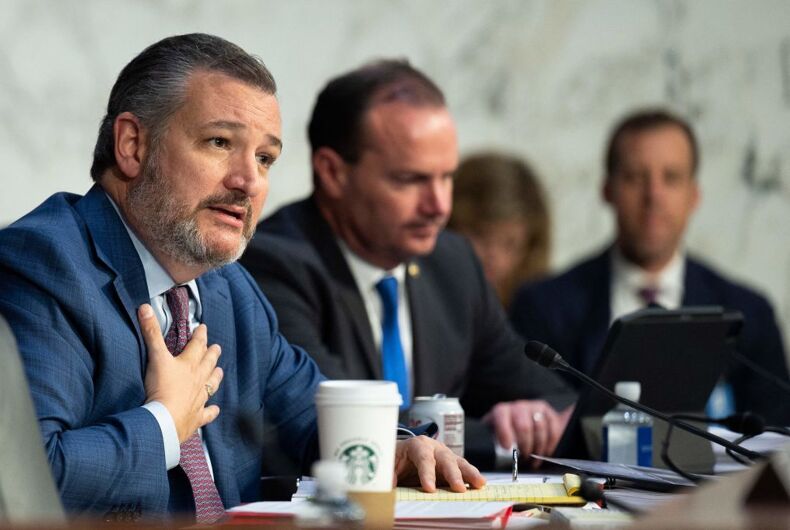 Sen. Ted Cruz (R-TX) has been one of the standout stars of Judge Ketanji Brown Jackson’s Supreme Court confirmation hearing – and not in a good way.

First, the GOP gadfly threw a hissy fit in a Montana airport after missing his flight to D.C. for the hearings; security had to be called. Then once he made it to the hearing, he’s spent most of his time lobbing strange accusations and asking if he can somehow turn himself into an Asian. Now his narcissism is the main story in Cruz’s never-ending drama.

Jackson has endured loads of inane and leading questions from Republicans, handling them with aplomb, but attacks on transgender people have been a recurring theme by GOP senators. Sen. Marsha Blackburn (R-TN) and Cruz have been two of the main instigators of the anti-trans rhetoric.

But Sen. Ted Cruz (R-TX) managed to ask a question about transgender people that was so dumb that she just couldn’t hide her visceral response.

“I’m an Hispanic man,” Cruz asked Jackson, as he mocked transgender people’s identities. “Could I decide I was an Asian man?” Cruz, who has a degree from Harvard Law School, apparently remembered that he’s supposed to be asking questions about the law so he added, “W-would I have the ability to be an Asian man and challenge Harvard’s discrimination because I made that decision?”

“Tsk,” Jackson said disapprovingly, looking down. It was a brief moment before she gave her response: “Senator, I’m not able to answer your question.”

After he got nowhere with his “gotcha!” questions, Cruz engaged in a back-and-forth with Senate Judiciary Committee Chairman Dick Durbin (D-IL) for going over his time limit.

Then just to make sure that the cameras captured every moment of his grandstanding, Cruz reportedly returned to his seat and yanked out his phone to check his mentions on Twitter, according to Los Angeles Times reporter Nolan D. McCaskill and confirmed by photojournalist Kent Nishimura.

Can confirm this. He was searching twitter for his name, this was right after his exchange with Chairman Durbin. https://t.co/pd7W6SHVPV pic.twitter.com/AKXoe4CYKK

Twitter quickly lit up with users mocking the narcissistic Senator.

I knew it. I knew Ted Cruz was a self searcher https://t.co/0TUEBSntcr

I saw a tweet earlier that called him Walmart Wolverine 🤣

It turns out to have been "tense" and with "heated exchanges", as if, for the major press, the shouting and vituperation just came from nowhere/everywhere. Who could know or pick out which mic was on? 🤦🏼

That is the accurate scientific term.