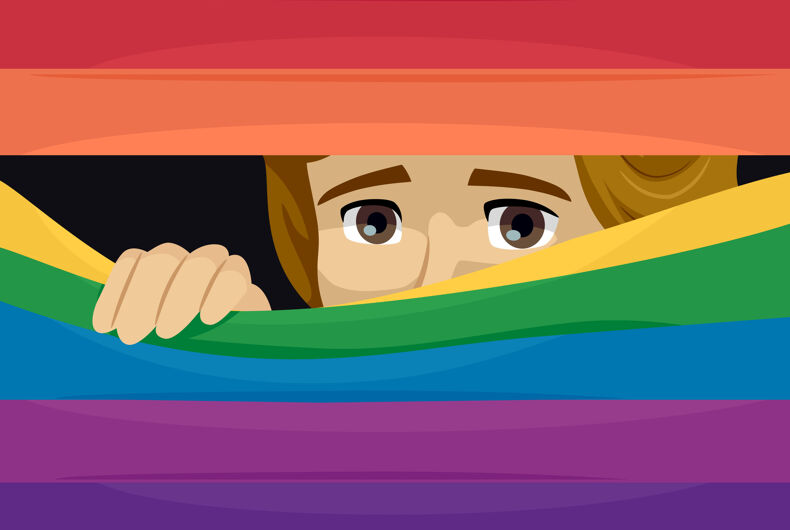 Being bisexual can be a real rollercoaster. Between being attracted to multiple genders to dealing with discrimination from both straight people and the LGBTQ community, bisexuals have a lot to deal with. Including bisexual panic.

But what does bi panic mean? Is it a good thing or a bad thing? Find out below.

The Good: When You Find Yourself Attracted To Everyone

The first definition of bi panic describes the overwhelming feeling of realizing you’re attracted to people of different genders. Bi panic can happen when someone who hasn’t reckoned with their sexual orientation yet suddenly comes to the realization that they may be bi.

For instance, a straight woman who kisses her best friend on a dare and suddenly catches feelings could go down a bi panic spiral the next day, coming to terms with the fact that she might not have been as straight as she thought she was.

Bi panic could also be used to describe the phenomenon of feeling paralyzed in the face of meeting someone you’re attracted to but being too stunned to speak. The most popular example of this is the Brooklyn Nine-Nine bi panic meme, which shows the character Rosa Diaz bi-panicking over Alicia, an attractive Uber driver who she gets along with.

rosa bi panicking over alicia and the two instantly connecting with each other is the best thing on brooklyn nine nine pic.twitter.com/Hlf5UD5N1K

The Bad: When Biphobic People Panic Over Bisexuality

Sadly, there’s another side to the bi panic coin – and it’s not a pretty one. The word “bi panic” can also be used to describe how non-bisexual people can go into a biphobic panic around bisexual people, mostly out of a stereotypical understanding of what it means to be bi.

What does this mean, exactly? Bisexual people face a lot of stigma from both straight and gay people, and they can often feel like they’re living in a “double closet”.

“Bisexual folks experience stigma not only from heterosexual communities, but also from – even though they’re named in it – the L.G.B.T.Q. community,” says researcher Jessica N. Fish. “The stereotypes of confusion, that it’s a phase, that they’re promiscuous, those perpetuated on both sides.”

Some of the most enduring stereotypes about bisexual people include:

A stereotype that plagues bisexual men more than anyone, this myth implies that bisexuals are just gay men or lesbians who have yet to decide on or accept their sexuality. However, any bisexual will tell you that this simply is not true. Bisexuality is a completely valid sexual orientation and is not a stepping stone towards another identity.

Bisexuals Are Sexually Promiscuous And Will Hit On Everyone

Just because bisexual people have the capacity to be attracted to more than one gender, it doesn’t mean that they’re all hypersexual people who have no respect for other people’s boundaries. Unfortunately, there is an assumption that bi people will eventually find their gay and straight friends attractive and try to hit on them – hence the bi panic that some straight people tend to feel when their friends come out as bi.

For a lot of bisexual people, it can be hard to maintain committed relationships due to the insecurities of their partners over their bisexuality. Some people tend to assume that bisexuals are never happy to date just one gender at a time (though this is hardly ever true for most bisexuals), and some even flat out refuse to date someone just because they’re bisexual.

The Ugly: The Effects Of Bi Panic

Unfortunately, the bad type of bi panic isn’t just a nuisance to bisexual people. It can leave a lasting impression – affecting one’s self-confidence and sense of self-worth – and make them feel misunderstood or incapable of experiencing love. It can even make them question the legitimacy of their orientation.

“[Those negative stereotypes] can be really influential on someone’s mental health,” says Fish.

Bisexual people are thus less likely than those who identify as gay or lesbian to open up about their sexual orientation – even to people close to them.

And despite making up the majority of the LGBTQ population, bisexuals face the highest rates of mental health issues, including:

Researchers also found that “the more anti-bisexual experiences someone has, the worse their health can be”.

Yes, bi panic is very much a real thing. We hope that you only experience the good kind of bi panic – the kind that leaves you feeling too stunned to talk when you see a beautiful couple walking down the street – and not the panic that gay and straight people feel when confronted with their own myths and misconceptions about bisexual people.

How you can help LGBTQ Ukrainians right now