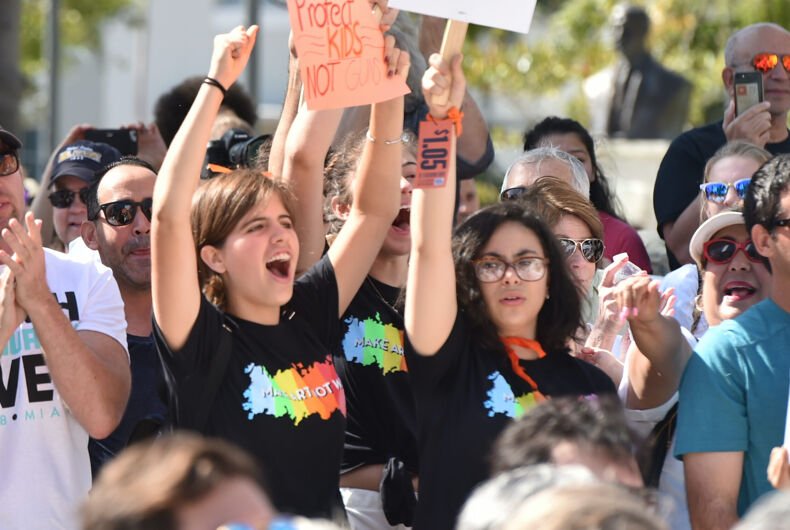 Photo of a protest.Photo: Shutterstock

About 55 transgender youth, supportive parents and other community allies protested outside the Texas governor’s mansion in Austin last Sunday in a demonstration against Governor Greg Abbott’s policies targeting trans kids. They outnumbered anti-trans protesters about 50 to 1.

The “Trans Kids Cry for HELP!” Rally — organized by Trans Resistance of Texas and PFLAG Austin — held a protest that was “purposefully joyful, a raucous showing of love and acceptance meant to oppose the terror and uncertainty Abbott’s recent directive has thrust upon families with trans children,” reported The Dallas Morning News.

Related: Texas parents with transgender kids are raising money online to move out of state

The protesters took aim at Abbott’s order requiring the state’s Department of Family and Protective Services (DFPS) to start “child abuse” investigations against any families accessing gender-affirming care for their trans kids.

“[Abbott’s order] threatens to take trans kids away from loving and supportive parents in order to force them to detransition in the foster care system. Additionally, this will impact the trans kids already in the state’s care by removing any potential support they had within the system and further traumatizing them,” the protest’s organizers wrote on Facebook.

Protesters of all ages attended the Sunday protest wearing rainbow and trans flags as capes and holding signs that read, “This teacher will not comply,” “Abbott is a useless clownish bully,” “Leave us alone,” “Protect trans kids”, “Trans rights are human rights,” “Nurses for trans rights” and “God loves trans kids and so do we,” Austin Monthly reported.

Meanwhile, on the mansion steps, trans children and their families shared stories of their experiences.

One self-identified trans kid, who kept their identity a secret in order to avoid possible investigation, said they needed puberty blockers to avoid the mental anguish they’d experience from the irreversible physical changes of puberty.

“If I had to go through puberty as a boy, I’d rather die,” they said. “We know who we are and what we need to be happy.”

Another speaker, nonbinary Texas-born activist Alok Vaid-Menon, urged their fellow protesters to turn to one another for support.

“The only way they can relate is by disappearing us from the face of this earth and yet we still are here. We remain here, and we’ve been here century after century, decade after decade, policy after policy. We remain here,” they added.

One military veteran and father told the crowd, “I came from a conservative family. And there was a time when I doubted that transgender children could exist. I can now listen to our counselors or our doctors. I doubted my wife, but I never, never doubted my love for my child,” he said.

“Watching her grow and watching her suffer, observing her pain, changed my behavior and adjusted my values to the man you see before you — a crying dad,” he continued. “For the most part, my family’s on the other side of this journey because Nicole received the medical care she needed.”

About 10 people reportedly attended the counter-protest at the Texas Capitol building across the street, Liberation News reported.

At one point, Owen Shroyer, a host of the transphobic conspiracy theory broadcast InfoWars, attempted to disrupt the rally, but he was kept away by police. Shroyer has been charged in connection with the January 6, 2021 insurrection at the U.S. Capitol.

“It’s not just wrong, it has an impact on our employees, our customers, their families and our work,” the ad stated.

A judge has temporarily blocked Abbott from using DFPS to investigate families with trans kids. Texas’ Attorney General Ken Paxton has issued an appeal that he says will allow DFPS to continue with Abbott’s directive.