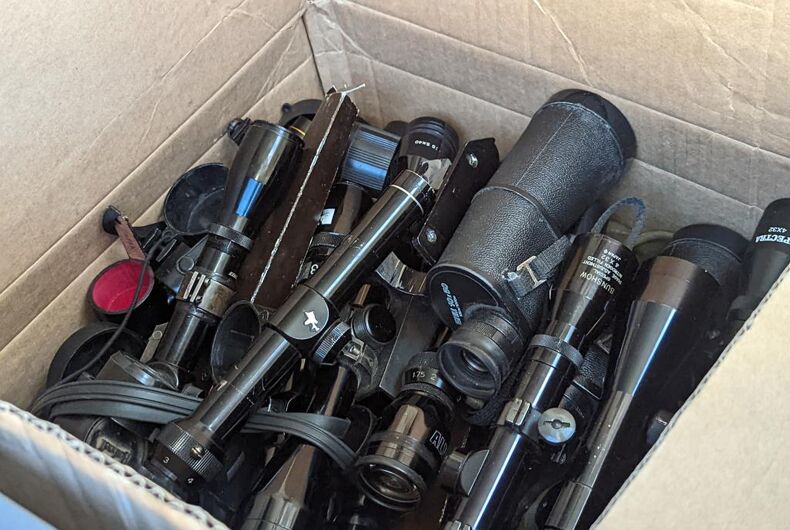 Rifle scopes waiting to be delivered to the front line.Photo: Sarah Ashton-Cirillo

Who knew that time became irrelevant during a war?

I’ve now traversed Ukraine multiple times since the Russian invasion began. From two different border entries in Poland and from the three western cities – Lviv, Ivano-Frankivsk, and Novovolynsk – I’ve traveled to the war’s current most northern front, the eastern metropolis of Kharkiv.

Despite being around 600-800 miles – a drive that could be done in a day in most of the European Union – the journeys have taken me three days each time.

The highway system is nearly unpredictable. Be it by bus or car, checkpoints and road closures render the idea of planning a journey around Google Maps an exercise in futility.

In Ukraine, the idea of schedules and deadlines, measured in minutes, hours, and days, is becoming irrelevant.

Supplies are needed. Both humanitarian and military equipment is essential to help the displaced and to outfit the more than 200,000 new members of the new Ukrainian Territorial Defense Force.

Having been embedded with a governmental security unit for nearly two weeks now, I’ve been part of a one-day run with its members in a two-car caravan that turned into a multinational effort, and ultimately saw the need to put four vehicles into use and a return six days later.

When the needed gear and food becomes available they have to be accepted and picked up immediately or else another group will grab it.

And when do trains run? That depends.

First, the question has to be asked, “Will the train be running?” Only then can you proceed to even make plans to travel somewhere. It’s not uncommon for a trip to any number of Ukraine’s central stations to conclude with an immediate return home.

There is some good news, however. Tickets don’t exist anymore, either.

While this type of societal shift seems ineffective and in some ways a step backward, the singular on community, without the accompanying complaint of “how things were,” is a major reason why the patriots of Ukraine are indeed defeating Putin’s war criminals.