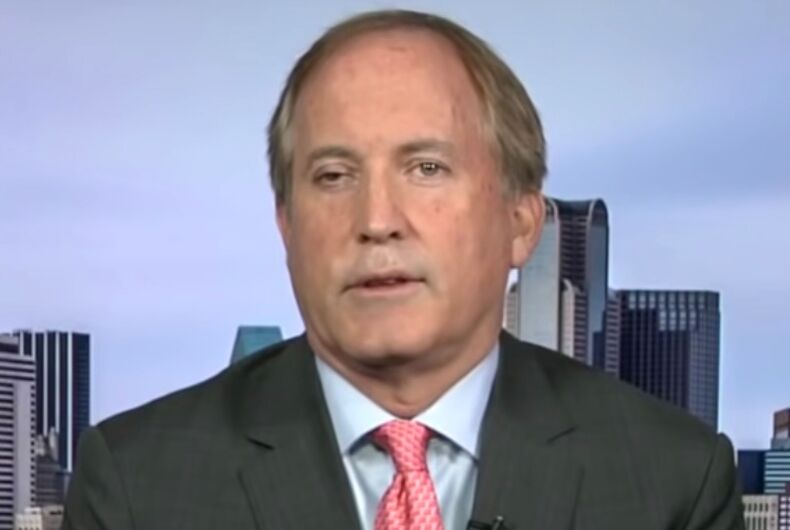 Texas Republicans’ crusade against transgender kids may result in the state losing over a billion dollars in federal funds. So, they’re suing the Biden Administration to get the money.

On March 2, the U.S. Department of Health and Human Services (HHS) issued guidance stating that the Affordable Care Act (also known as ACA or Obamacare) forbids states from restricting medical care based on a person’s gender identity or sex assigned at birth.

The guidance was specifically issued by HHS in response to a directive issued last month by Texas’ Republican Governor Greg Abbott. Abbott ordered the state’s Department of Family and Protective Services (DFPS) to conduct “child abuse” investigations against parents who provide gender-affirming medical care to their trans kids.

In 2020, the federal government gave $1.36 billion in federal funds to the Texas’ Department of State Health Services. HHS could block similar funding in the future if Texas maintains its anti-trans crusade.

Paxton’s lawsuit filing said the HHS guidance is based on an “erroneous interpretation of sex discrimination” and that his state isn’t denying health care based on gender identity. Rather, Paxton said, the state is just trying to protect children from “unnecessary medical interventions.”

His order also prevents young trans people from receiving hormone replacement therapy and puberty blockers that stave off irreversible biological changes during adolescence. These treatments have been found to reduce mental distress and suicide among trans youth by up to 50 percent.

This week, a Texas judge denied Abbott and Paxton’s attempt to throw out a lawsuit challenging Abbott’s directive. The lawsuit, filed in part by the Texas ACLU and Lambda Legal, was on behalf of a family being investigated by the DFPS for child abuse.

Gillian Branstetter, a spokesperson with the National Center for Transgender Equality, said that directives like Abbott’s “carry a body count … [and] empower parents to reject what they are being told by doctors” and insert politicians into private family matters in an attempt to score political points with far-right transphobes.

These guys offer a wonderful portrait of modern fatherhood. Meet Vernon and Ricardo.