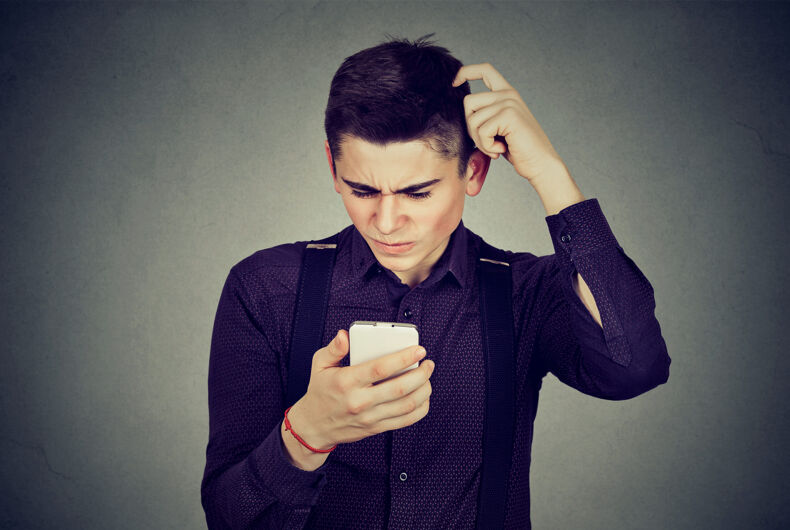 LGBTQ “influencer activists” on Instagram and other social media platforms may actually be making their audiences dumber by repeatedly stating that all political events hurt LGBTQ people the most, out cultural critic Jason Okundaye stated in a recently published Gawker article.

While it’s true that society’s ills often fall hardest on LGBTQ and other marginalized people, this isn’t a helpful lens for understanding the true complexity of every single social ill, Okundaye argues.

Related: Vandals ransacked Ukraine LGBTQ center and savagely bit one of its workers

To illustrate his point, Okundaye mentions Adam Eli, who has over 100,000 Instagram followers. One of Eli’s recent tweets, copied onto his Instagram and written in response to the Russian invasion of Ukraine, read, “In times of war, marginalized people are always hit first. This includes queer people, especially trans people. Below is a list of organizations that are helping queer people in the Ukraine.”

“This is incoherent, of course,” Okundaye wrote. “The Russian invasion has launched an indiscriminate bombing campaign which endangers all Ukrainians, regardless of identity.”

In fact, Okundaye says, the invasion has specifically required male Ukrainians to stay and fight. Racism has left Black refugees stuck at border crossings and women are most often subjected to sexual violence from invading forces, he adds. As such, are LGBTQ Ukrainian organizations really the groups we should be donating to and highlighting the most in this tragedy?

The idea that political events always harm queer people the most denies the fact that “systems of oppression are complex, there is not a one-size-fits-all model for how different communities are affected by those in power,” Okundaye wrote. Additionally, such lenses narcissistically center “the feeling and savior instincts of queer people living in the global north” within issues “which have nothing much to do with them at all.”

In another example, Okundaye cites a post from influencer activist Matt Bernstein. After the Terrence Higgins Trust announced that “the number of new HIV diagnoses in heterosexual people is higher than in gay and bisexual men for the first time in a decade,” Bernstein responded, “that’s crazy will they be allowed to donate blood?”

Before deleting the post, Bernstein’s response received over 12,000 retweets and 50,000 likes. But while it’s catchy, it ignored the fact that Black women and men who have sex with men continue to be the populations most affected by HIV and its stigma, not just some amorphous group of HIV-positive middle-class heterosexuals looking to donate blood.

In short, social media slogans about LGBTQ issues can be catchy. But if you’re letting them do all the thinking for you, then you’re missing out on the many shades of nuance beyond the colors of the rainbow.

What you need to know about xenogender