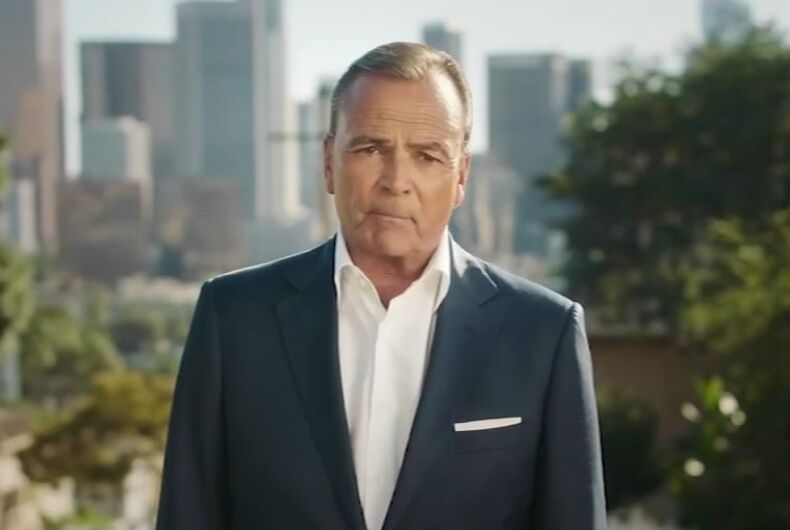 A few weeks ago I wrote an article strongly encouraging Rick Caruso — the developer behind some of LA’s most popular retail establishments including The Grove and The Americana — to run for Mayor of Los Angeles.

I felt passionately that he — based on his track record of being a great businessman with a can-do, get-things-done kind of attitude and approach — could perhaps be the sole person out there who if they ran could deliver real, tangible change for the people at City Hall.

Well, you can imagine how thrilled I was when just a couple of weeks later Caruso officially jumped into the race, launching his campaign from the get-go with a substantive policy agenda which explains to the voters exactly what he will do to address our big challenges if he is elected in November. You can read it all in detail at his campaign website, but I thought I might take a moment to provide an overview and also put it specifically in the context of what he’ll do for the LGBTQ+ community.

Rick’s main priority is to finally end homelessness in Los Angeles, which is a big goal but is possible with the kind of tools Rick is proposing to utilize. Rick says on Day 1 of his administration he will declare a state of emergency in the city, which will allow him to take full control of the issue instead of having to deal with the 15 members of the L.A. City Council who would likely hold up progress.

This way, he can immediately get to work on building housing for the homeless and giving all of them the shelter and services they need. Homelessness is sadly an issue that as we know disproportionately affects the LGBTQ+ community, especially LGBTQ+ youth, so knowing he is fully committed to ending it once and for all is incredibly promising.

Another big priority of Rick’s is curbing crime which we have seen a big increase of in LA in recent months and years. We’ve seen horrific stories of people in the LGBTQ+ community who have been targeted and become victims of violence based on their sexual orientation or gender identity.

Rick is proposing to increase the police force by 1,500 officers to make sure that law enforcement has the numbers they need to keep all of our citizens safe. He decreased crime by 30 percent when he was President of the L.A. Police Commission and was just endorsed by the L.A. Police Protective League (the union for LA’s police officers), which says a lot about how serious he is on this front.

I also think his personal experience as a businessman and his commitment to small businesses should be of great interest to our community at a time when we see so many LGBTQ+-owned businesses going under due to increasing rents, operating costs and the aftermath of COVID’s effect on the economy.

As a business owner himself, Rick knows how to help get these businesses back on their feet, and I believe will help lead a revival of LA’s small business landscape. When COVID was at its worst, Rick suspended rent for many of the retailers at his establishments to help lessen the burden on them at a time of great difficulty. That shows how much he deeply cares on this issue.

Rick has been a great friend and ally for the LGBTQ+ community for a while now. Back in 2016, he made a big deal out of banning the famous boxer Manny Pacquiao from The Grove where he had recently been seen shopping. Rick banned the boxer due to comments Pacquiao had made that were homophobic and against same-sex marriage, saying that he believed people in same-sex relationships were “worse than animals.”

Rick responded by saying that “these are statements of hatred… A lot of people from the gay community come to The Grove and they have a right not to feel uncomfortable.”

The fact that Rick would be so empathetic and make such a strong public stand in solidarity with our community shows where his heart is and how strong of an advocate he will be for us if he becomes mayor.

I strongly urge all of the LGBTQ+ residents of Los Angeles to support Rick Caruso for Mayor, because I have no doubt on all the big issues that he will deliver for our community across the board.