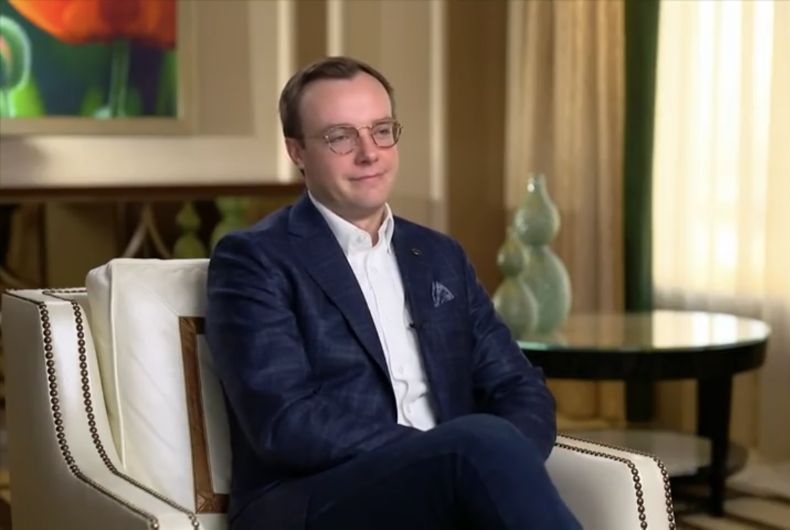 Far-right Twitter troll Matt Walsh is trying to gin up anti-gay controversy about Chasten Buttigieg, who is married to Transportation Secretary Pete Buttigieg. Now rightwing outlets like the Washington Examiner are trying to amplify it – and failing miserably because it is so inane.

They’re accusing Buttigieg of leading children in pledging allegiance to the Pride flag instead of the American flag. Further dampening their zeal to smear the former teacher, the footage comes from the Amazon documentary Mayor Pete that came out last year.

The moment shows Chasten at Pride Camp, talking to young LGBTQ youth. In the segment, Buttigieg, like countless camp counselors before him, leads the group in pledging allegiance to the camp as part of their daily activities. And since the camp for queer youth uses a rainbow flag as their banner, the Examiner headline screamed, “Chasten Buttigieg leads camp for gay teenagers in pledge of allegiance to pride flag.”

In a desperate attempt to portray the teacher as a nefarious agent with allegiances only to the queer community, the outlet even went so far as to transcribe the sinister pledge. And the Log Cabin Republican, a group for queer Trump supporters, made sure to join in.

“I pledge my heart to the rainbow of the Not So Typical Gay Camp,” the campers recite with Buttigieg. “One camp, full of pride, indivisible, with affirmation and equal rights for all.”

Walsh regularly targets the LGBTQ community with homophobic tropes. He has said that the Buttigieges shouldn’t have been allowed to adopt children because “babies need their mothers.”

He also released a “children’s book” last year about a boy named Johnny “with a big imagination.” He likes to pretend to be different things until “the internet people find out Johnny likes to make-believe, he’s forced to make a decision between the little boy he is and the things he pretends to be — and he’s not allowed to change his mind.”

According to Media Matters, Johnny first pretends to be a walrus by using spoons as tusks. Then he puts on gray makeup, and then visits “a doctor who offers a ‘simple procedure’ to cut his ‘feet into fins!’”

The book is intended to mock transgender youth, comparing the experience of gender dysphoria to pretending to be a walrus.

This is from the Amazon Prime documentary "Mayor Pete." They proudly filmed and aired this moment. Nobody noticed until now because nobody watched the documentary.