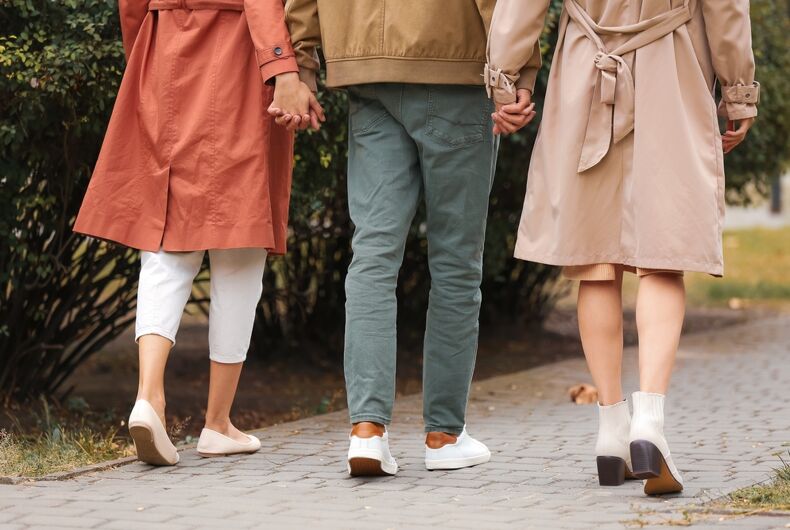 If you’ve ever felt like monogamy wasn’t for you, know that you’re not alone. In a study by the Kinsey Institute, 81 percent of respondents said they fantasized about open relationships at least once in their lives. And at least one in five Americans have entered some kind of consensual non-monogamous relationship.

Polyamory – or the practice of dating multiple partners at once – has, for the most part, been on the fringes of what most people consider as “normal” dating behavior. After all, the concept of monogamy has been reinforced for time immemorial by religion, government, films, TV shows, and music. So much so that most people do assume it to be the default, normal way to have romantic relationships.

But, in recent years, more and more people have begun to recognize non-monogamy as an option that’s just as real and valid as its counterpart. Even big celebrities like Willow Smith, Nico Tortorella, and Bella Thorne have opened up about their experiences with non-monogamy and how it’s worked out for them.

But how do you actually know if polyamory is right for you? How do you answer the question “Am I polyamorous?” without even having experienced it? Here, you’ll find four important questions to ask yourself before you begin testing the waters that will, hopefully, help you gain a better understanding of the practice and whether it’s something that could work for you.

The word “polyamory” comes from the Greek term “poly”, which means “many”, and the Latin word “amor”, which means “love.” So, a polyamorous person could be described as someone who is capable of falling in love and maintaining romantic relationships with more than one person at a time.

One of the biggest misconceptions about ENM is that it’s an excuse for cheating. However, there is a key distinction between the two. Cheating involves one partner entering a romantic or sexual relationship with another person without their partner’s consent. In an ethically non-monogamous relationship, however, everyone involved needs to enthusiastically consent to the dynamic – hence, the term “ethical”. It’s a dynamic that gives partners the freedom to be involved with more than one person in a way that’s mutually satisfying and enjoyable.

Am I Polyamorous Test: 4 Questions To Ask Yourself

So how do you know if polyamory is right for you? Based on what experts have said about the practice, these are some of the questions you should be asking yourself.

Take note: This isn’t exactly your typical “Am I polyamorous” quiz because there won’t be a grade or score by the end. What these questions are meant to do is help you recognize some of the signs that may be difficult to catch because of how much society normalizes monogamy. Some of these questions are also meant to prepare you for some of the more challenging realities of being in a polyamorous relationship.

1. Have you ever wrestled with commitment issues?

A lot of polyamorous people can tend to feel “trapped” in monogamous relationships, feeling like they’re being robbed of their chances to explore potential relationships with other people. So, they can end up resenting their partners and cheating.

Unfortunately, compulsory monogamy – or the idea that monogamy is the only option or the “endgame” in terms of romantic relationships – reinforces the idea that commitment issues are just something to get over, rather than a sign that perhaps monogamy isn’t the right fit for some people.

2. Have you experienced falling in love with or having crushes on multiple people at the same time?

This is perhaps the most obvious sign that you’re polyamorous. “Polyamorous people believe you can love multiple people”, says sex and relationship therapist Renee Divine. “They’re open to additional people in that way, and they want that emotional attachment. Plural love is the main focus.”

This is an important distinction to make between other types of non-monogamy because some people only seek out other partners for sexual variety. These types of people tend to have high sex drives and enjoy having different kinds of sexual relationships.

But polyamory is more than just sex – it involves emotional intimacy as well. If you don’t think you can be romantically involved with more than one person, then perhaps you’re better suited to consensual non-monogamy (like open relationships or swinger-type relationships) than polyamorous relationships.

Polyamorous people also tend to believe that one person cannot fulfill all of their needs. It’s not just about being attracted to multiple people, it’s also about acknowledging that you may have varied needs that you can’t necessarily get from just one partner – and that is okay.

3. Are you okay with the idea of your partner seeing other people?

Depending on the kind of polyamorous relationship you enter – and there are many different types – you may have to share your partner with other people. Will this feel like a betrayal to you, or do you think it’s something that you can be comfortable with?

For polyamorous people (at least those who aren’t solo poly), it’s necessary to be able to get to a place where you can be okay with or even be happy for your partner when they date other people. That feeling has a name, and it’s called “compersion”. It can be described as “the happiness in knowing your partner is happy”. For some, seeing their partners date other people can even be a turn-on.

Of course, jealousy does still happen in polyamorous relationships. Polyamorous people just learn to communicate their feelings and find the root causes of their jealousy – otherwise, it could jeopardize their relationships.

“Jealousy can be broken down to determine what your real concerns are,” says social worker Stephanie M. Sullivan. And in many instances, jealousy has less to do with your partner’s feelings and behaviors and more to do with your own insecurities. According to researchers, jealousy can stem from factors like low self-esteem, feelings of insecurity in your relationship and possessiveness, and an anxious attachment style.

4. Are you comfortable communicating your fears, insecurities, boundaries, and limitations?

While you can be drawn to polyamory even if you’re not exactly the best communicator or the best at setting boundaries, there are some important aspects for maintaining healthy and successful polyamorous relationships:

“Whatever your personal buttons are, polyamory will almost certainly push them”, Ginny Brown writes for Everyday Feminism. Because of this, it’s good to start working on your personal issues before you try polyamory.

Am I Ready For Polyamory?

Polyamory is not easy. Poly people face a lot of judgment and confusion because most of us have been raised to believe that monogamy is the one and only way to have romantic relationships. Maintaining poly relationships can also be time-consuming and emotionally taxing, considering all the variables you have to deal with.

Despite that, for some people, polyamory is the only option for a decent shot at being happy. And that shouldn’t be something to be ashamed of!

Related: How this queer family moved to rural Alabama and won over hearts and minds

Out Democrat Jolanda Jones is ready to take on Texas Republicans