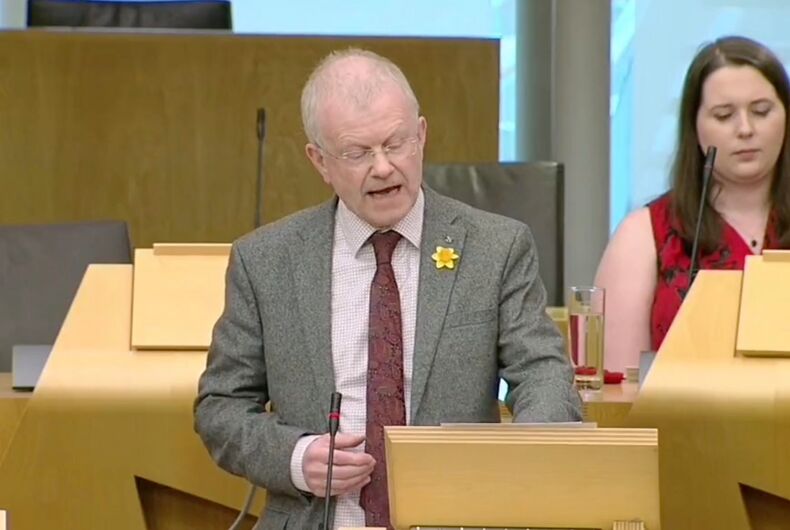 During a debate about banning the harmful and illegitimate practice of conversion therapy, a member of the Scottish parliament went on an anti-LGBTQ rant in which he compared being gay to drinking too much alcohol or eating too much chocolate.

John Mason, a member of the Scottish National Party, repeatedly invoked the Bible in his speech decrying homosexual acts, stating that it’s not sexual orientation the Bible regulates, but rather sexual activity.

Mason claimed this distinction is extremely important and that it’s possible to support people of varying sexual orientations as long as they have the “self-control” not to act on their desires, similar to the way people hold back on drinking alcohol or eating chocolate.

“The need for self-control and choosing not to put your thoughts or desires into action is key,” Mason said. “I might have a natural desire to eat the attractive food I see. Many of us are tempted to eat too much chocolate or drink too much alcohol. So that is where self-control comes in. We sometimes need to say no to ourselves.”

Many religions, he said, see “conversion” as a positive word that means “turning away from something bad like alcohol or drug abuse” and that “a religion or a club or an association should be free to have its own teaching going above and beyond the law of the land, whether that be a dress code in a bowling club or nightclub or teaching around alcohol or sex in a religious setting.”

He goes on to “urge parliament to be careful about interfering too much with religious beliefs and practices” and said he is fine with instituting a conversion therapy ban as long as “we are careful about definitions in the legislation, and we do not attempt to interfere with freedom of religion or belief.”

He also argued for the right to utilize prayer as a form of conversion therapy and emphasized that it should be ok as long as repentance and prayer focus on “wrong activities rather than wrong orientation,” comparing sexual identity, again, to alcohol abuse.

Activist Blair Anderson blasted Mason for his words. “Disgusting and insulting to hear John Mason MSP compare the experiences of conversion therapy – widely seen to be a form of torture – to being in contravention of a dress code at a bowling club or eating too much chocolate.”

Now as John says at the end he "supports" a ban but it feels like he wants a ban in name from listening to this speech. pic.twitter.com/fxCAtwBL9m