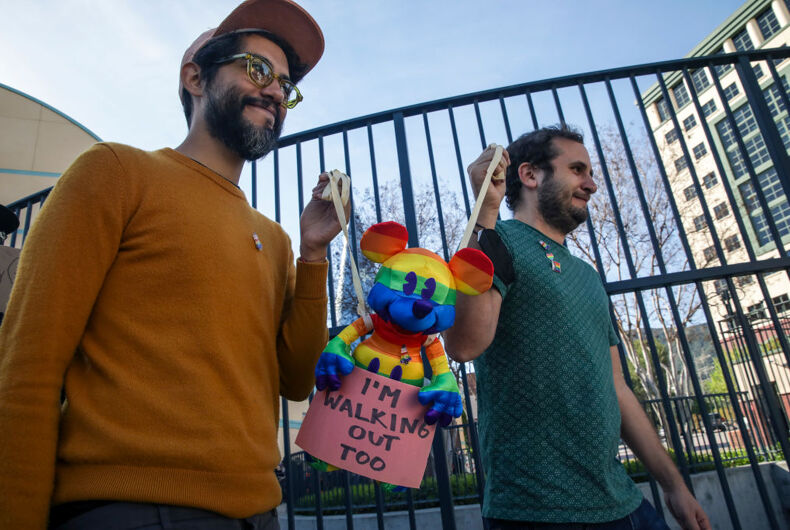 On Tuesday, Disney employees across the country participated in a walkout to protest the company’s lackluster response to Florida’s discriminatory “Don’t Say Gay” bill. Others, including some Disney-affiliated celebrities, expressed their support on Twitter.

The controversy began when it was revealed that Disney had donated money to the “Don’t Say Gay” bill’s main sponsors. In addition, Disney CEO Bob Chapek initially refused to publicly condemn the measure. He wrote that “corporate statements do very little to change outcomes or minds” and “are often weaponized by one side or the other to further divide and inflame.” Instead, he highlighted the company’s commitment to telling diverse stories.

Chapek then said he would meet Florida Gov. Ron DeSantis (R) to discuss somehow preventing the bill from being weaponized against LGBTQ people. In response, DeSantis said that he refused to bow down to “woke corporations” and released a video accusing LGBTQ people of trying to “inject transgenderism into kindergarten.”

Trying to do damage control, Disney said it would donate $5 million to the Human Rights Campaign (HRC) and other LGBTQ rights organizations. HRC rejected its donation and said Disney needed to take more direct action to combat the bill.

Soon after, employees at Pixar claimed that Disney censors LGBTQ content and that executives had cut every attempt to show same-sex affection or LGBTQ characters – including a kiss between two same-sex characters in the upcoming Toy Story prequel, Lightyear. Executives have since announced the smooch will be restored before the film is released.

Including the company’s LGBTQ employees.