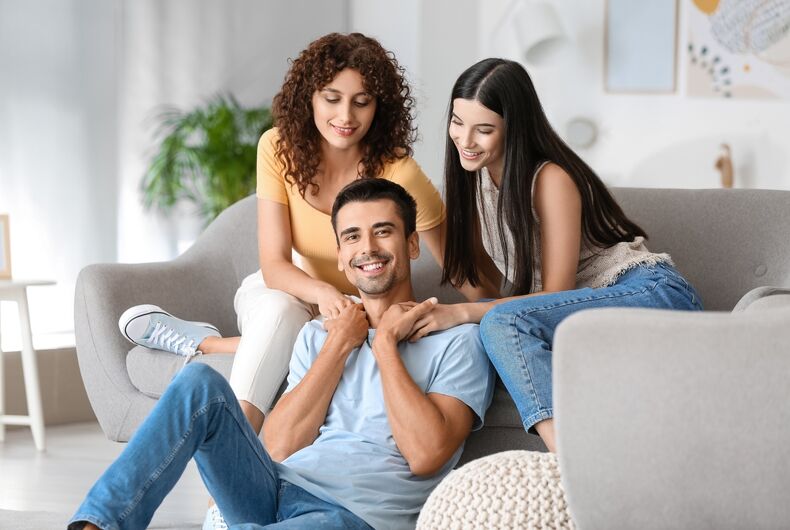 Monogamy and polyamory are often described as opposites. The former refers to two individuals committing to one another exclusively, while the latter involves multiple partners engaging with each other simultaneously.

Some also see these as a binary system and that there is nothing in between. But emerging research suggests that there is a middle ground between the two and that relationship orientations do come in a spectrum.

Let’s talk about ambiamory, its meaning, the reasons someone may identify as ambiamorous, and more.

Ambiamorous Definition: What Does It Mean?

This term describes those who are comfortable with both monogamy and polyamory. These people are fully capable of forming long-term, committed relationships with either one or more than one person and value different kinds of partnerships. In general, ambiamorous individuals have little preference between either relationship orientation.

Most people describe being ambiamorous as enjoying relationships in different contexts. Ambiamory can include romantic attraction, sexual desires, platonic feelings, and all other aspects relating to monogamy and polyamory.

Why Would Someone Identify As Ambiamorous?

Ambiamorous people reject the notion that relationships have to be a particular structure to be valuable or genuine. Another relationship style that challenges the so-called norm is relationship anarchy, where relationships don’t have rules that the individuals involved did not mutually and explicitly agree on.

Why would someone identify as being ambiamorous? In general, a person may do so because they are open to both monogamous and polyamorous relationships.

Here are a few specific situations where one might identify as being ambiamorous:

There may be other reasons why multiple people will identify as being ambiamorous. The bottom line is that they are disclosing that they are comfortable with polyamorous setups without closing themselves off to the possibility of being in an exclusive, monogamous relationship.

Why Would Someone Ambiamorous Practice Monogamy?

We can’t speak for all ambiamorous individuals out there, but there are a few common reasons why someone who is ambiamorous will choose monogamy over polyamory.

Here are a few reasons why someone ambiamorous will commit to a single partner:

Since being ambiamorous means that they can enjoy monogamy and polyamory, it’s not too usual to meet someone ambiamorous who decides to have only one partner. They may also be tired of the stigma of polyamorous relationships and have consciously chosen to live a more ordinary life.

Why Would Someone Ambiamorous Practice Polyamory?

On the flip side of the coin, why would someone ambiamorous choose to have other partners? An ambiamorous person may decide to enter a polyamorous relationship system for the following reasons:

How Do You Know If You’re Ambiamorous?

If you’re equally happy in both monogamous and polyamorous, then you might be ambiamorous. You may also be ambiamorous if you have no preference for either one of the relationship systems.

But if you’re having a hard time pinpointing where you land on the relationship orientation spectrum, here are a few questions to help you narrow it down:

If you answered “yes” to any one of these questions, you might be ambiamorous. But remember that these questions are only meant to guide you, as the true answer will ultimately have to come from you. You’re the only person who knows your feelings and what you want in romantic relationships.

While the awareness for ambiamorous is still relatively low, research has shown that it’s fairly common, with many people out there saying that they aren’t confined to either monogamy or polyamory. Instead, their ideal relationship system can be either of these or somewhere in between.

Instead of restricting our perspective to a binary system of monogamy and polyamory, it’s important to realize that relationship orientations come in a spectrum, with many people landing somewhere in between.

Trans woman Kathryn Newhouse killed by her own father