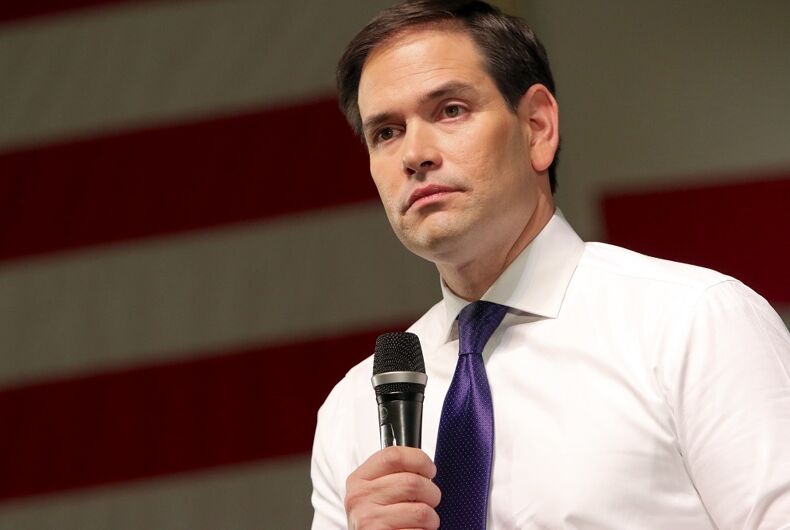 Immediately after the Pulse nightclub massacre, Sen. Marco Rubio (R-FL) made a point of telling conservative Christians that they needed to be more tolerant. Now he’s invoking Sodom and Gomorrah as his idea of tolerance.

Six years ago, Rubio told a gathering of the Florida Renewal Project, a notably anti-LGBTQ conference, that American history “has been marred by discrimination against and rejection of gays and lesbians.” What Christians need to do was show more love and less condemnation, Rubio told the gathering.

“Abandoning judgment and loving our LGBT neighbors is not a betrayal of what the Bible teaches, it is a fulfillment of it,” Rubio said. “Jesus showed us how to do this. Jesus showed us that we do not have to endorse what people do in order to accept them for who they are: children of a loving and merciful God.”

That’s the kind of play-acting as a statesman that gets you fawning coverage in The New York Times. It looked like a bold move–go straight (so to speak) to the source to challenge the prevailing approach, risking political capital, showing some compassion immediately after a national tragedy. It also appealed to the pundit class, who remembered the GOP’s 2012 post-election analysis, which said that the party needed to ratchet back the anti-LGBTQ rhetoric.

Of course, none of Rubio’s rhetoric was anything other than posturing. Now that Florida’s Don’t Say Gay legislation is barreling toward becoming law, Rubio is using the very kind of language that would thrill the hearts of the very same Christians he was lecturing in 2016.

First, Rubio tweeted that Murthy was arguing that schools “should be having discussions with children from 5 to 8 years old about sexual orientation & gender identity.” Apparently dissatisfied with relying upon the standard defense, Rubio decided to up the ante. Just fourteen minutes after that tweet, he came out with the fire and brimstone.

Hear the word of the LORD, princes of Sodom! Listen to the instruction of our God,people of Gomorrah!

As a combination of pandering, hypocrisy, and sheer offensiveness, that tweet is hard to beat. Of course, that pretty much sums up Rubio’s career, along with a large dollop of clownishness. (Remember his obsessive water-swilling when he responded to the State of the Union address in 2013?)

The truth is that talk is just that–talk. When it comes to actually putting faith into action, Rubio has always fallen short. His voting record on LGBTQ issues in Congress started out as dismal and quickly plummeted, earning him a zero from HRC in the most recent session.

Now that he is up for re-election this year, Rubio is going to go all-in on the DeSantis/Trump approach to politics: all snarl, bullying, and sharp elbows. The problem is that, as Rubio proved in his failed 2016 presidential run, he’s not really good at playing that role.

But he is good at sucking up. He’s managed to get into Trump’s good graces, and that’s enough to make him the favorite in the race. Unfortunately, that means we’ll get to see more of the man Trump called Lil Marco trying to pander to the worst impulses of his party instead of trying to correct them.