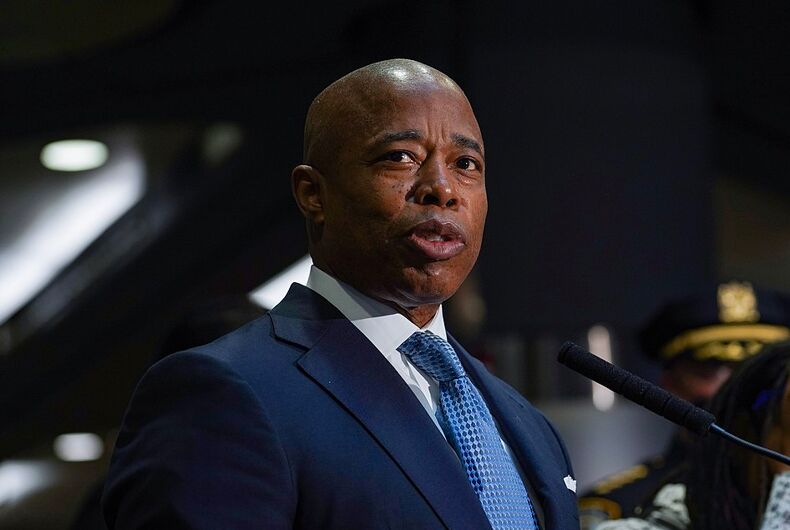 Rev. Kathlyn Barrett-Layne of Reach Out and Touch Ministries was one of nine people the mayor picked for the city’s Panel on Educational Policy. She’s the latest in a string of anti-LGBTQ nominees by the Adams administration, but the first that the mayor has turned on.

In nominating her, Adams’s office issued a press release that said Barrett-Layne “spends her time inspiring people with her speaking and teaching in Bible studies.”

Just hours later, The New York Daily News published some of her anti-LGBTQ comments. She compared homosexuality to pedophilia in her 2013 book Challenging your Disappointments and said that being gay is one of many “temptations” Christians face.

“Leaders struggle with the same temptations of drugs, alcohol, homosexuality, fornication, adultery, pedophilia, stealing, lying, envy, covetousness, and every other sin that the congregation struggle with,” she wrote. She also wrote that prison inmates “live in the grip of fornicating homosexual lifestyles.”

In her 2004 book When your Mess Becomes the Message, Barrett-Layne said that her child told her “she was a boy” when the kid was three-years-old after the child was in the same room as a lesbian. She wrote that she and her husband “began to militantly and violently pray for, with and over our daughter.”

“We prayed against every spirit that was not of God, including the spirit of homosexuality,” she wrote. “At the end of that prayer, my daughter asked me if she was a girl. When I told her yes, she happily began to sing and rejoice about being mommy and daddy’s little girl. To tell you this was one of the most frightening experiences I had with my little girl is an understatement.”

She was pushed to resign shortly after the story about her anti-LGBTQ comments was published.

LGBTQ activist Allen Roskoff said that her resignation is “only a partial victory.”

“Her replacement needs to be someone from the LGBTQ community,” he said. “We’re only halfway there.”

Adams has come under fire for appointing several people with anti-LGBTQ histories to positions of power. One was former New York City Councilman Fernando Cabrera (D), who was hired for a “faith-based” position in the administration even though he supported Uganda’s “Kill the Gays” bill several years ago, traveling to the African nation and praising it for fighting the “promotion” of homosexuality.

“The United States of America has put pressure; It has told Uganda, ‘We are not going to fund you anymore unless you allow gay marriage,’ and they have stood in their place. Why? Because the Christians have assumed the place of decision-making for the nation. Abortions are illegal here — things that Christians really stand for. Why? Because the Christians here took the opportunity to take their rightful place,” Cabrera said in a video.

Brooklyn pastor Gilford Monrose was hired to head the Mayor’s Office of Faith-Based and Community Partnerships. He said in a 2015 interview that homosexuality “is a lifestyle that I don’t agree with, but I accept and love all people.”

He opposed marriage equality in the state in 2011 when the legislature was considering it, saying that voting against it is “about protecting the timeless institution.”

“Gay rights activists demand uncompromising acceptance,” he wrote on Facebook at the time.

Erick Salgado was hired to serve in the Mayor’s Office of Immigrant Affairs. He ran for mayor in 2013 and was endorsed by the National Organization for Marriage, an anti-gay extremist group.

“I am proud to serve in this administration under the leadership of Mayor Adams, and share his long-held values of tolerance and inclusion,” Salgado said in a statement following his appointment by Adams. “My views have evolved as society has evolved.”