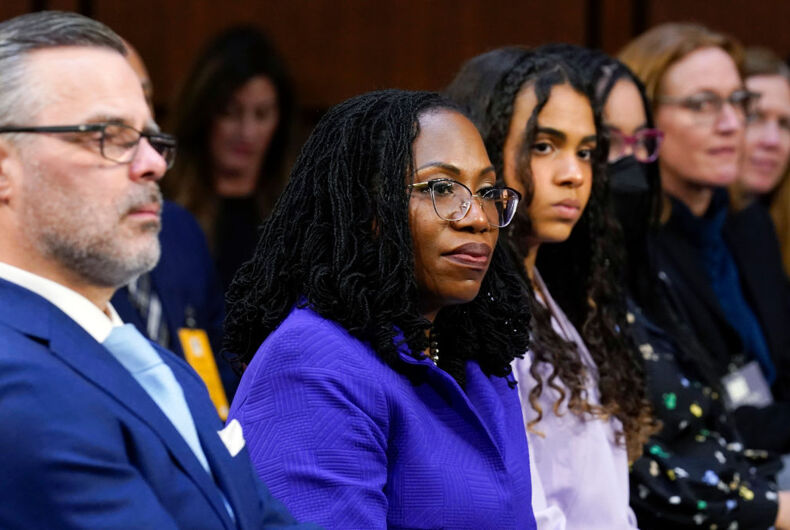 This time, the Republican was Sen. Mike Braun (R-IN), and he said the Supreme Court was wrong to legalize interracial marriage, referring to the 1967 Loving v. Virginia decision.

Braun was attacking Judge Ketanji Brown Jackson for being a judicial “activist” during a conference call with journalists. Jackson, who would be the first Black woman on the Supreme Court if confirmed, is married to Dr. Patrick Jackson, who is white.

“Whenever I vote for a Supreme Court justice it’s going to be, basically, how are you going to interpret the law,” he said. “If your record shows that you’re going to be kind of an activist there, I don’t think that’s good, and I don’t think the Founders intended it that way.”

He brought up Roe v. Wade, which protected the right to abortion, saying that the Supreme Court should leave such issues to the states.

“So you would be OK with the Supreme Court leaving the issue of interracial marriage to the states?” a reporter asked Braun.

“Yes,” he replied. “If you’re not wanting the Supreme Court to weigh in on issues like that, you’re not going to be able to have your cake and eat it too. I think that’s hypocritical.”

The reporter then asked about the 1965 Griswold v. Connecticut – which stopped states from banning contraception – and Braun said “you can list a whole host of issues,” but he will always have the same answer: “We’re better off having states manifest their points of view, rather than homogenizing it across the country,” even if states violate the rights of their residents.

REPORTER: "You would be okay with the Supreme Court leaving the issue of interracial marriage to the states?"

SEN. MIKE BRAUN (R-IN): "Yes. If you are not wanting the Supreme Court to weigh in on issues like that, you are not going to be able to have your cake and eat it too." pic.twitter.com/jiVTMOpC01

Braun later tried to walk back his comments in a statement.

“Let me be clear on that issue — there is no question the Constitution prohibits discrimination of any kind based on race, that is not something that is even up for debate, and I condemn racism in any form, at all levels and by any states, entities or individuals,” the statement said.

During her opening statement at her Senate confirmation hearing, Jackson said that her husband is “the best husband, father, and friend I could ever imagine. I have no doubt that without him by my side from the very beginning of this incredible professional journey, none of this would have been possible.”