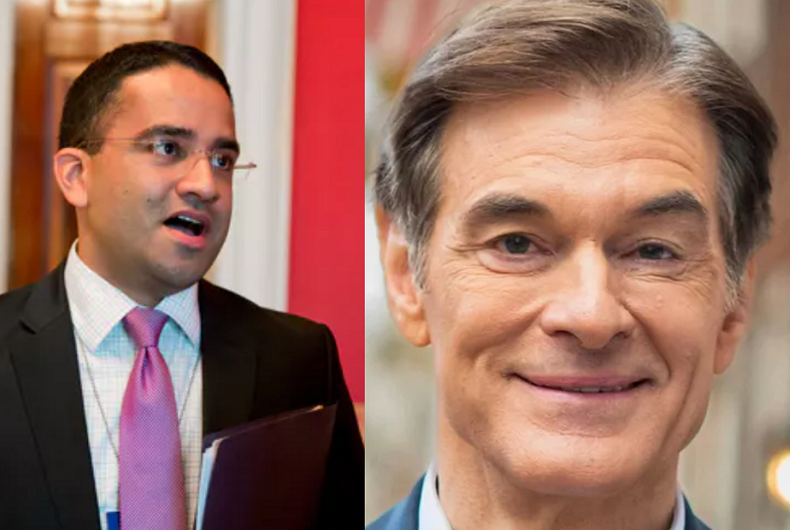 Dr. Mehmet Oz is angry that the Biden administration fired him from the President’s Council on Sports, Fitness & Nutrition, an advisory board that Donald Trump appointed Oz to in 2018.

“Please submit your resignation to me by the close of the business day,” out director of the White House Office of Presidential Personnel Gautam Raghavan wrote in a letter to Oz. “Should we not receive your resignation, your position with the Council will be terminated effective 6:00 p.m. tonight. Thank you.”

Oz is well known for promoting pseudoscience on his show. One of the weight-loss “miracle” cures he has pushed on his audience are raspberry ketones, which he called “The No. 1 Miracle in a Bottle” on his show. He had a guest on his show who said that the pills can help people lose weight in as little as five days, a claim that is not backed by science.

And it wasn’t just raspberry ketones; Oz has pushed a number of supposed miracles on his show, often related to weight loss.

In 2014, he was called before Congress to answer for the false information he pushes on television. Then-Sen. Claire McCaskill (D-MO) asked him, “Why you need to say this stuff when you know it’s not true?”

He responded: “I actually do personally believe in the items I talk about on the show. I passionately study them. I recognize that oftentimes they don’t have the scientific muster to present as fact.”

Oz was also wrong on the biggest medical crisis of the last several years: the COVID-19 pandemic. He has touted Trump’s response to the virus while complaining on television that medical experts were stifling alternative ideas on how to handle the pandemic, calling out mainstream researchers who “ridiculed and canceled” people who didn’t agree with the scientific consensus.

He used his platform to promote hydroxychloroquine as a treatment for COVID-19, even though there’s no scientific evidence showing that it’s effective at fighting the disease. He has also repeatedly challenged infectious disease expert Dr. Anthony Fauci to a debate over the efficacy of vaccine mandates, calling Fauci a “petty tyrant” for supporting vaccines, masks, shut-downs, and other measures to contain the pandemic.

Oz ran to Fox News to complain about how the Biden administration kicked him off the council.

Biden is “playing political games here,” Oz said. “The shocking priority, by the way, talking about me being moved off the president’s council when we’ve got inflation at a 40-year high, gas prices at a 15-year high, the Ukraine catastrophe we should be talking about.”

Uh what does inflation have to do with the fitness council? Lol

In 2012, Oz aired a program that looked at “both sides” of conversion therapy, the harmful practice based on the discredited claim that gay people can be “cured” of their homosexuality. He subsequently said in a blog post that he thought that the form of psychological torture was “harmful,” but he never said as much on the more widely-watched show.

Today, Oz is running for one of Pennsylvania’s seats in the U.S. Senate, which may be the immediate reason he was fired from the council.