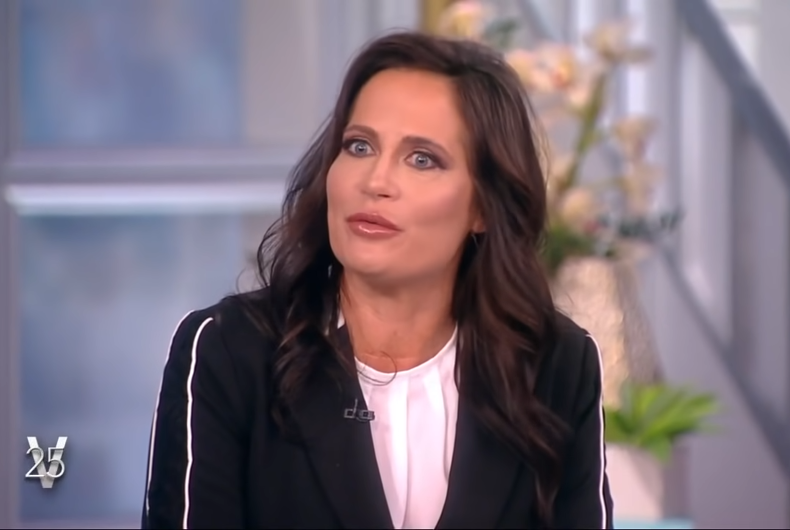 Former White House spokesperson Stephanie Grisham admitted on The View yesterday that her gay son is embarrassed that she worked for Donald Trump.

Since Trump left office, Grisham, like many other administration officials, has gone on an apology tour to rehabilitate her image after helping to prop up one of America’s most dangerous leaders.

The panel was discussing Florida’s detestable “Don’t Say Gay” bill that prohibits elementary school teachers from mentioning LGBTQ people or issues to students. The measure could prevent teachers from acknowledging some students’ parents and would allow parents to sue if they find any content “objectionable.”

“So is this bill shaming kids from being who they are and punishing teachers who actually want to help them? I mean, I’m not sure what the point of this is,” host Whoopi Goldberg said up front.

Co-host Sara Haines agreed and used her sibling as an example of the dangers the law would pose.

“My brother is gay and I remember him sharing this story,” she said. “He started to feel different at about five or six. If he asked a question, he could have been in a situation where he turned to a teacher that had to betray him. I think this is going in the wrong direction.”

“I think the cruelty is the point,” co-host Sunny Hostin responded. “It’s to shame family. It’s to shame children. We could see this coming, I think, when you start banning books, when you start banning history in the classroom. What’s the next step? It’s banning discussions about sexual orientation and gender identity. It’s banning discussions about certain religions.”

Hostin brought the discussion back to Grisham and that she propped up a president who “started to say the quiet part out loud,” encouraging racism and anti-LGBTQ sentiment at every opportunity.

But Grisham spelled it out when she brought up her gay son’s reaction.

“This one is personal to me,” Grisham proclaimed. “And you bring up a good point because of my former boss. I have a 14-year-old son who is gay, recently came out as gay. I have his permission to talk about this.”