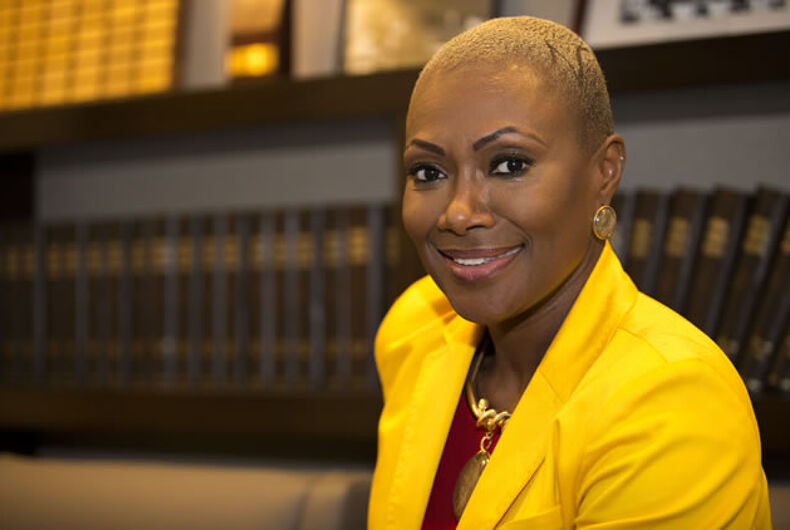 Out Texas house candidate Jolanda Jones (D) says she isn’t afraid of anything – least of all Republicans.

“There’s nothing that can affect me that’s worse than anything I’ve already lived through,” she told LGBTQ Nation. “There’s nothing any Republican can throw at me that I won’t conquer.”

Jones has endured more hardships in her life than one person ever should. Those hardships, she said, have given her the strength and resolve she uses every day to fight for what she believes in.

The challenges she has experienced – from the deaths of several family members to being sexually assaulted as a child – have propelled her “to bigger, better, greater things.”

“I’ve been talking about changing my kryptonite to my super power,” she said.

That’s why on her website, she declares that “Republicans may have broken our government but they can’t break Jolanda Jones.”

Jones is running in a state where the Republican-led government has become known for making some of the most vicious attacks in the country against LGBTQ people, mostly youth.

And Jones is ready to fight for the community.

“If they’re willing to have conversations with me in good faith, I’m happy to try to move the needle with them, but if they want to fight, I’ll tee up for that as well. Because I will fight them with everything I have in me.”

Jones has dedicated her career to standing up for what she believes in. She’s a criminal defense and family lawyer, and she has also served on the Houston City Council and school board.

She grew sick of people coming to her with problems she couldn’t solve because they were caused by what she deemed “bad state laws.” So, she decided to run for state house and actually try to change some of those laws.

She’s focused on advocating for voting rights, as well as affordable housing and health care. She’s also dedicated to trans rights, a cause she has held dear for a long time.

“My grandmother taught me that God doesn’t make mistakes, and we are who we are.”

Jones didn’t come out as gay until later in life, but she said she always fought for LGBTQ people as an ally before that. She realized she was gay while serving on the City Council and was terrified to come out. She didn’t know how her supporters would react.

But she decided she had no choice but to find out.

“Everything I do, I do either 1000 percent or I don’t do it at all. So when I came out, I kicked the door in and dared anybody to say anything.”

She was surprised to find that the response was overwhelmingly positive, even among people she knew who had expressed anti-LGBTQ sentiment before.

“All of a sudden, [they] know they know somebody gay,” she said.

Jones is currently running in two elections for Texas district 147. The first is a special election on May 7 to fill a seat left vacant by Rep. Garnet Coleman’s (D) retirement. The winner will serve through the end of the year. The second is a Democratic primary runoff election on May 24 to elect a representative through 2024.

Coleman has endorsed Jones, writing that she “is the most qualified, experienced, and passionate candidate, and that she has a proven track record of getting things done.”

I urge every one of my supporters to vote for @JonesJolanda for State Representative, District 147 – both in the May 7 special election and the May 24 runoff election. pic.twitter.com/FTADbwHatB

Jones wants voters to know that her goal is to help as many people as she can, but that she will always prioritize the most marginalized.

“If there are adequate resources, I will work my hardest to help all constituents, but if there are finite resources, my default position is to always fight for the least, the last, and the lost…People without resources – who knows where they’ll be if somebody like me isn’t here to fight for them.”

Am I polyamorous? How to know if polyamory is right for you