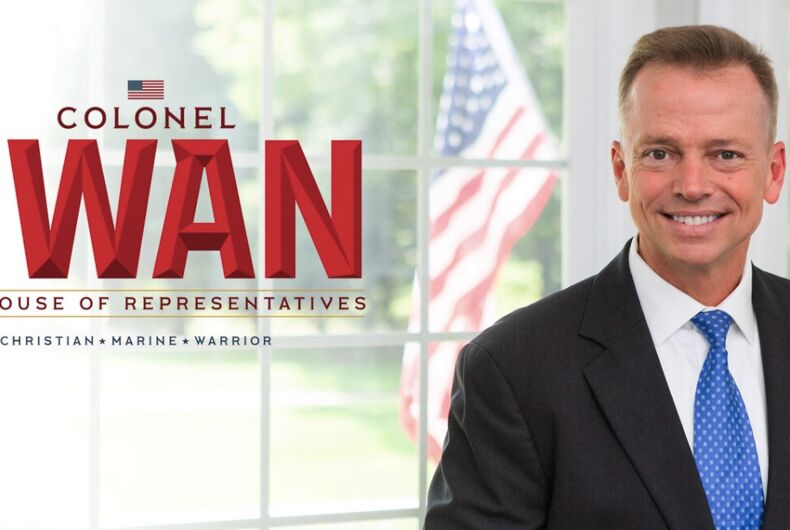 His reason? He considers trans identity to be a medical condition, like bedwetting and sleepwalking.

Related: Far-right Republicans opposed military funding bill because of trans soldiers. It passed without them.

“Many individuals with certain conditions, such as bedwetting and sleepwalking are disqualified from military service,” Swan wrote in a statement to Fox News. “They are not disqualified because they are bad people, but because these symptoms are considered mental and emotional issues that are not conducive to combat environments. Gender dysphoria is no different and should be treated the same; that it is not conducive to enhancing military performance or unit morale.”

“Allowing transgender individuals to serve sends a message to our adversaries that we are more focused on social experimentation than on the defense of our nation…. The military cannot afford to recruit a transgender individual who will need mental and physical attention over someone who is ready to fight from day one.”

Swan said that the American Armed Forces should be shaped by a global reputation for “military professionalism, courage and ferocity… not American woke culture.”

It’s no coincidence that Swan is bringing up a 5-year-old issue. He’s just one of many Republicans using transphobia to help propel their election campaigns. He’s also one of many conservatives claiming that President Joe Biden and the U.S. military are appearing “weak” on the world stage for bowing to left-wing “wokeism.”

Transphobes like Colorado Representatve Lauren Boebert and Trump’s former advisor Steve Bannon have both made recent comments praising Russia for being anti-LGBTQ.

Biden repealed Trump’s trans military ban in 2021. Even when it was in effect, the ban was only supported by social conservatives. Trump consulted no military experts before announcing the ban. Though he claimed that trans healthcare was too expensive for the military, it was revealed that the military spends $41.6 million annually on the erectile dysfunction medication Viagra, nearly five to 20 times what it costs to fund trans-related healthcare.