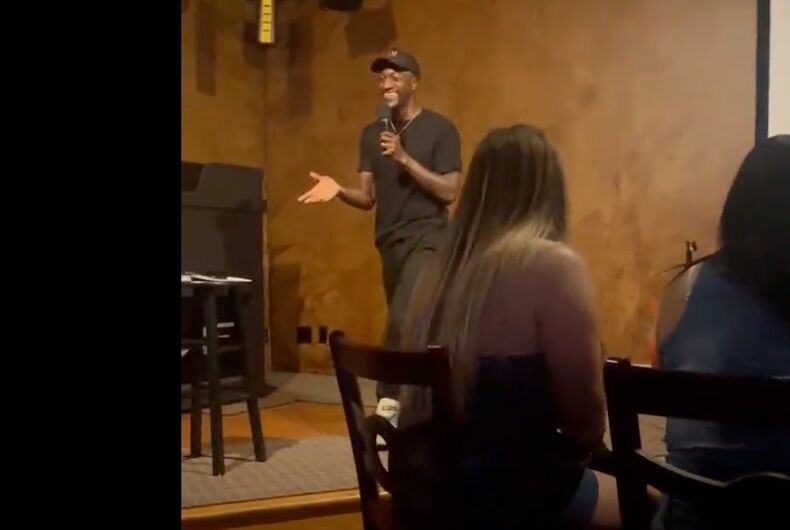 When actor Will Smith slapped comedian Chris Rock over the weekend for making a joke about Jada Pinkett Smith during the Academy Awards, the violence reverberated around the world. As social media debated whether or not Smith was justified, comedians warned that Smith’s outburst would make them targets on stage.

LGBTQ ally Kathy Griffin went viral for her tweet castigating Smith and warning of the message it sends, but comedian Sampson McCormick can look at it another way. He was also attacked on stage by an audience member, but McCormick, a gay man, bashed back. And then he finished his set.

Related: Now that we have Marjorie Taylor Greene’s hot take on Will Smith’s slap we can call it. We’re done.

Sampson, the first LGBTQ comic to perform at a Smithsonian institution, was performing at Win-River Resort & Casino in Redding, California when an audience member took offense and came up swinging.

Let me tell you something, it’s a very bad practice to walk up on stage and physically assault a Comedian.
Now we all have to worry about who wants to be the next Will Smith in comedy clubs and theaters.

When a woman in the audience started heckling him, McCormick gave it right back, asking her, “How many teeth do you have?”

“We were just sitting there enjoying the show, and Sampson was being funny…doing his thing when this little tweaker girl kept trying to get on stage,” audience member Susie Maldonado told The Advocate.

“This big heavy-set tweaker guy then just rushed the stage, yelling ‘what did you say about my sister,'” she says. “And I don’t even know if Sampson had the time to react because the guy clocked him hard, and then they began fighting.”

McCormick said the man told him, “I’m going to beat your Black ass.”

“He hit me so hard,” McCormick said, “I just started hitting him back as hard as I could.”

The comedian reportedly punched the man quickly a handful of times and then smashed his head into a table. Security intervened and the man was escorted out along with his girlfriend/sister. When the pair were gone, he picked up his mic and continued his routine.

“I think he was shocked that this Black, gay guy had just beat him because he stood there like he wanted to throw a chair but thought the better of it,” McCormick says.

“It sounds corny, but I like to bring love to my audience,” he said. “But don’t mistake my being gay as weak because I grew up in southeast D.C. and I will kick some ass.”

“After they got kicked out, he just started roasting them and incorporating the whole thing into his show, and it was hilarious,” Maldonado says. “Everybody loved it.”

“I give his performance a ten out of ten, and I see a lot of comedians. My standard is that if my face isn’t hurting by the end of the night, it was just ‘meh,’ but my face was hurting from laughing so much.”

A family of rednecks were in the crowd at my show in Redding,CA tonight—they couldn’t resist me, and I couldn’t resist them. Other than that it was a great show. 😩 pic.twitter.com/A0BL9ZgEAJ