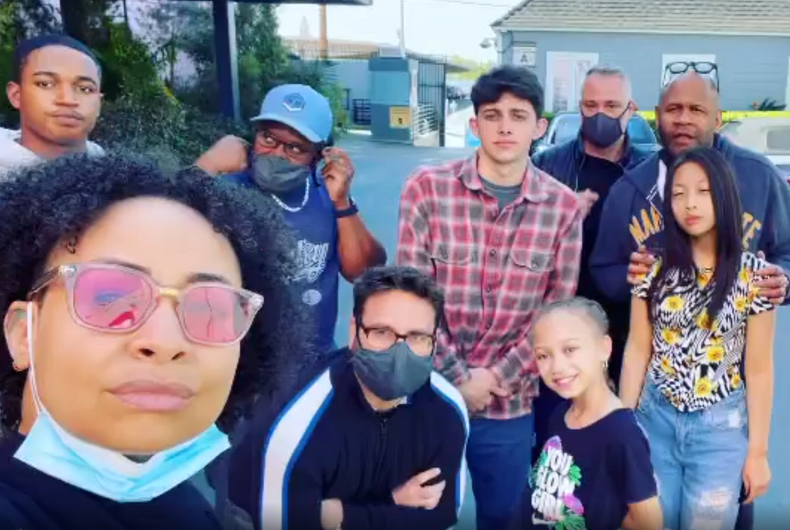 Raven-Symoné and the cast of Raven's House walked out in support of LGBTQ people. Photo: Screenshot

On Tuesday, Disney employees across the country participated in a walk out to protest the company’s lackluster response to Florida’s discriminatory “Don’t Say Gay” bill.

It is difficult to determine how many employees participated, since some did so virtually, but at the very least, small groups of employees from Pixar to Disneyland to Walt Disney Animation Studios showed their solidarity in person by walking off the job to demand that Disney to more to protect its LGBTQ employees.

Hundreds of Disney employees walking out at company HQ in Burbank #DisneyWalkout pic.twitter.com/n9QpNmAHIf

Time to watch The Last Jedi again, because this is a movement of leaders. Anyone can be powerful. No one owns the (labor) force besides ourselves.#DisneyDoBetter #DisneySayTrans#DisneySayGay #DisneyWalkout #WhereIsChapek pic.twitter.com/6yXYEmk3Xi

They joined in on writing letters of affirmation to the LGBTQIA+ children and families in FL effected by the bill.

What a day so far! Thank you all so much for the resounding support. It means the world to us.

Others, including some Disney-affiliated celebrities, expressed their support on Twitter.

Actress Kerry Washington, who works for ABC, posted a message that she is happy to be part of the Disney family but that “sometimes family members disagree” and “this is one of those times.”

“I don’t condone the actions or inactions of Disney in this moment,” Washington continued. “I wholeheartedly support the LGBTQIA+ employees, and stand with them in this walk out today. Please know that you matter. Your rights matter. Your voices matter. I encourage you all to help their voices ring louder today.”

Mark Ruffalo wrote, “Standing proud and in solidarity with our LBGTQIA+ family! #SayGay”

Standing proud and in solidarity with our LBGTQIA+ family! #SayGay #DisneyWalkout https://t.co/DdYsOVFxw9

Out actress Raven-Symoné, along with the cast of her Disney Channel show Raven’s Home, participated in person, walking off their set.

She posted a video on Instagram expressing her hatred for the bill, adding in the caption, “In support of our LGBTQ+ family and all of those who will be damaged by the ‘don’t say gay bill’ we the cast of Ravens Home are walking out. In todays world it is imperative that we take stands, show support, and move forward not backwards. Every family every person and every child deserves to be recognized no matter their race, gender, or sexual orientation. Education that reflects the truth and the world we live in is something we must fight for.”

On Monday, Disney released a statement to CNN stating, “This morning we held a virtual company-wide conversation on anti-LGBTQ+ legislation and Disney’s response to it. We know how important this issue is for our LGBTQ+ employees, their families and allies, we respect our colleagues’ right to express their views, and we pledge our ongoing support of the LGBTQ+ community in the fight for equal rights.”