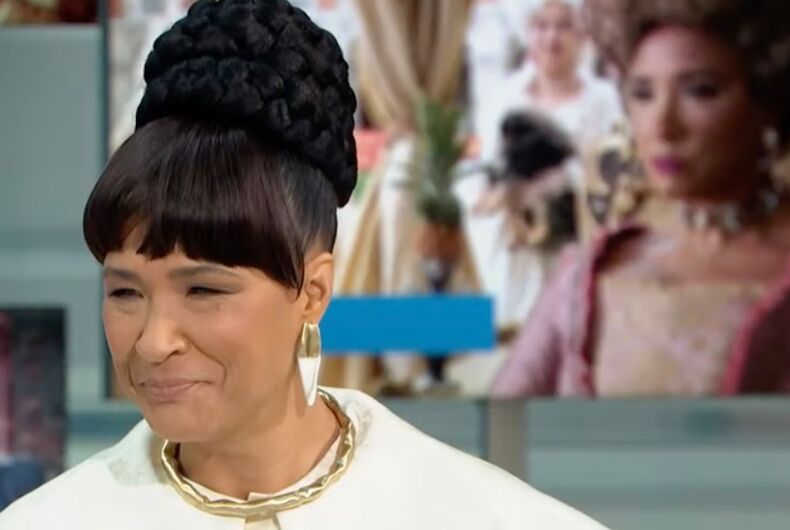 Out actress Golda Rosheuvel – who plays Queen Charlotte in the hit Netflix series Bridgerton – was once warned by a fellow gay actor that she should stay in the closet or risk ruining her career.

“I mean, it’s bullshit,” she told Out. “It was so weird because it was told to me by a gay [actor] who I thought was out and proud. It revealed a lot about her and her insecurities and what she was going through. But I think it really empowered me; it really made me look at myself and go, ‘How do I want to be? How do I want to represent myself in the world?’”

Related: Gabrielle Union speaks out about her gutsy decision to call Disney out on their own red carpet

Rosheuvel chose to represent herself authentically, as the out and proud person she is. And with Bridgerton season 2 out today, her career is flourishing.

She grew up with a very accepting family, she said. Even her priest father embraced her from the moment she came out. She said her parents “had dear, dear friends who are gay” and worked with both refugees and LGBTQ people in their community.

Rosheuvel has been in a relationship for almost ten years with Shireen Mula, a playwright.

“It’s great to talk about being gay,” she added. “That’s something that you never see, is it? You know the color of my skin when I walk into a room, but my sexuality, and the joys of that, one never sees until you get to know me. So to be able to talk about that is really joyous. Makes life worth living.”

In addition to her sexuality, the actress has also made waves for her role in Bridgerton as the Black Queen of England. She said she got “some really beautiful messages” from fans thanking her and saying, “‘I see myself now, it is possible.”‘

“[Showrunner Chris Van Dusen] talks about the moment that decision was made,” Rosheuvel said. “And the two words that they said were: ‘What if?’ What if we had this queen at the top? How could that push the boundaries that we have in this industry? To a point where it doesn’t matter. To the point where Black and brown artists can be celebrated. Yes, it’s a period drama. It’s fantasy. But the reality of these characters connects with the reality of the people who are watching it.”

“I’m gonna say yes. Definitely. I think she would be fascinated about everything.”

Trans woman Kathryn Newhouse killed by her own father