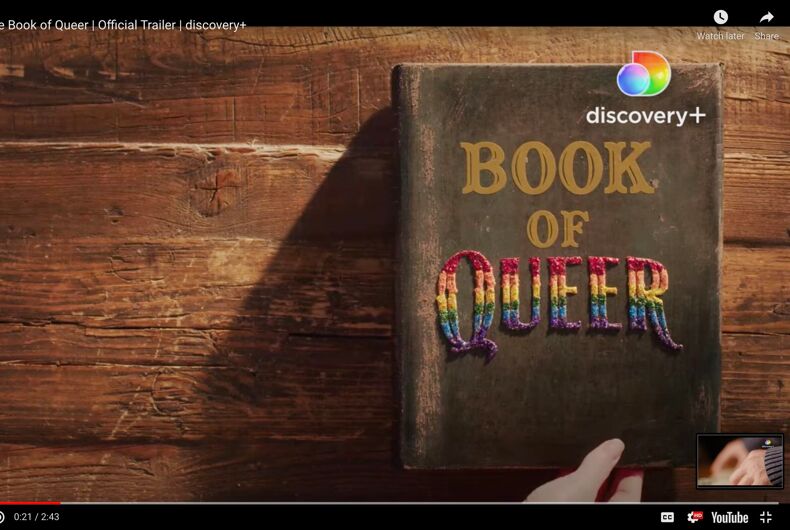 A unique and joyful series celebrating queer history is coming to Discovery+ this June.

The Book of Queer will highlight the stories of queer historical figures. Some of them you may have never heard of, and others are big names you may never have known were queer.

“I can’t wait for viewers to experience these beautiful, campy, empowering queer stories from our past, brought to life by an unprecedented all-queer cast of comedians and special guests, proving we’ve been here and queer since the dawn of humanity,” executive producer Dr. Eric Cervini told LGBTQ Nation.

The series will be 5 episodes, each culminating in a musical number performed by an LGBTQ music artist.

“The man behind the March on Washington, where Dr. King declared ‘I have a dream,’ was openly gay,” Cervini told Entertainment Weekly.

“A First Lady of the United States had a steamy affair with another woman. And, we may have already had a queer president. Yet so few people know these stories: viewers will be shocked by how much has been erased from our history books.”

Cervini, a queer historian,  announced the show on Instagram and told the story of how it came to be.

“As a queer historian, I often get asked: ‘Don’t you get depressed studying queer history?’ After all, the stories Hollywood tells us about ourselves are very often tragic: A gay cowboy dies. A political hero dies. A mathematician dies. Another gay cowboy dies.”

These stories, he continued, “don’t resemble the histories I encountered in my own research, while reading the letters and diaries of long-dead folks from across the centuries and across the queer spectrum. What I found, instead – in the form of love, chosen family, and community – was joy.”

He said he doesn’t feel depressed by queer history, but rather, reassured.

“If our ancestors found joy despite the Inquisition, the Lavender Scare, and the AIDS crisis, then I can certainly find joy amid the madness of today.”

He then explained his “hunch” that if he could find a way to share queer history “with laughter and authenticity” then people would come to understand “just how beautiful our shared past really is.”

That led to The Book of Queer, which he also said has the largest all-queer cast in Hollywood history.

Cervini is excited to share these stories because they “prove we didn’t just survive; we thrived.”