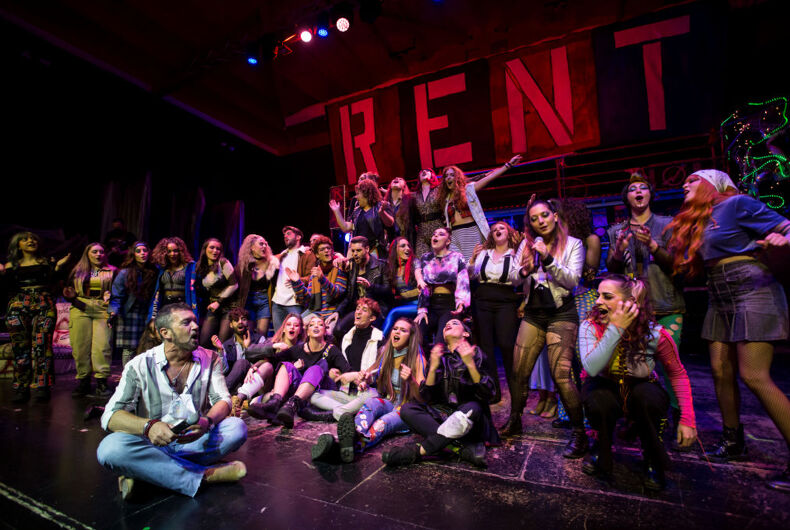 An audience member stormed out of a British theater during a performance of the musical Rent after finding out that it was about gay men.

The show is about a group of performers struggling to survive in the shadows of the AIDS epidemic. The show’s inclusion of HIV and AIDS was groundbreaking at the time.

The Bite My Thumb community group issued a statement following the unstaged drama, apologizing for the interruption and explaining what happened.

“After a storming performance of “Today 4 U, Tomorrow 4 Me”, a single audience member picked up their coat, rose from their chair and left the auditorium. On exiting, the individual turned to a member of the front of house team and declared “I DIDN’T REALISE THIS SHOW WAS ABOUT GAYS,” the group wrote.

“All the cast, creatives and backstage crew of the production were utterly disgusted to hear about this display of small-minded ignorance. As a theater company, we purposely chose Rent to give a voice to the LGBTQ+ community and educate on the horrors of the AIDS epidemic.”

The group announced they’ll be donating part of the box office to an LGBTQ charity in response to the audience member’s ignorance.

“Boy are they in for a surprise when they go see Cats,” one person tweeted in response, “or Hamilton.” The audience member will be stunned to find out what those musicals are about.

One of the longest-running shows on Broadway, Rent won a Pulitzer Prize for Drama and a Tony Award for Best Musical.

A statement from us about a horrible incident during our matinee performance at @carriageworks_ pic.twitter.com/WZeTJFvOPp