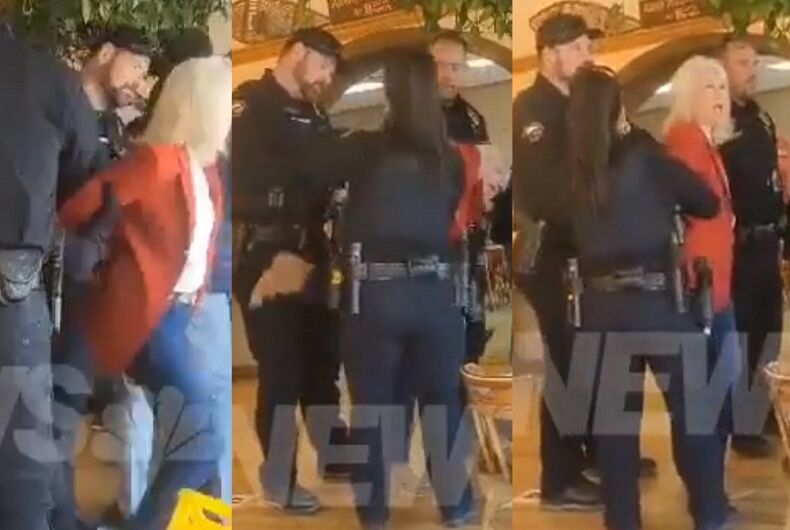 Tina Peters was arrested outside a bagel shopPhoto: Screenshots

A Trump-supporting county clerk in Colorado who is facing charges for election fraud in connection with a QAnon-related scheme tried to kick police officers who were arresting her as she allegedly refused to comply with a warrant.

And it was caught on video.

Officers were attempting to serve Mesa County, Colorado Clerk and Recorder Tina Peters (R) with a warrant to seize her iPad this past Monday because she was allegedly improperly recording court proceedings. She was at court for a hearing involving her deputy clerk Belinda Knisley, who is accused of cybercrimes.

While Peters – who has become something of a celebrity in 2020 election conspiracy theory circles – claimed she wasn’t recording the court proceedings, the arrest warrant states “the iPadOS camera application was open, distinguishable with the red record button” and that someone in the room “saw that the view in the viewfinder was a live view of the courtroom.” The judge had told them that they weren’t allowed to record the proceedings.

Security video from the courtroom that 9 News obtained even shows Peters holding an iPad up in front of her. The warrant was issued to seize the iPad because Peters was “believed to have been created, viewed, accessed, modified, deleted, downloaded or saved” about 90 minutes of video in the court.

Three officers went up to Peters at 10:45 a.m. on Tuesday at a bagel shop to present her with the warrant, and she decided to make a scene, according to video recorded on someone’s phone.

She struggled with the officers and attempted to kick one of them while shouting “It hurts!” – likely referring to the handcuffs – as the officers held her hands behind her back.

“Let go of me! Give me my key to my car!” Peters shouted. The officers then took her outside.

The Grand Junction Police Department said that people called 911 in the following hours to complain about Peters getting arrested, and they asked the public not to use 911 for that purpose.

Peters was released the same day and charges are pending, authorities said.

UPDATE: Republican Mesa County Clerk Tina Peters appeared to attempt to kick a law enforcement officer while struggling with police during her arrest. This is video from a witness. pic.twitter.com/TILJ1198BV

The arrest was not related to the other charges Peters is facing. She has already been stripped of her authority in overseeing elections by a county judge in connection to a lawsuit from the state. Peters is accused of allowing an unauthorized person to access voting software in the county and then lying about it, as part of a scheme to prove QAnon-related conspiracy theories about the election.

Peters is also facing ethics and campaign finance complaints related to gifts she received as an elected official.

Peters’s lawyer said that she was willing to comply with the warrant to seize the iPad, but she said that the officers were trying to take other possessions that weren’t covered in the warrant and that’s when she reacted negatively.

35 years after his death, Andy Warhol is seriously trending