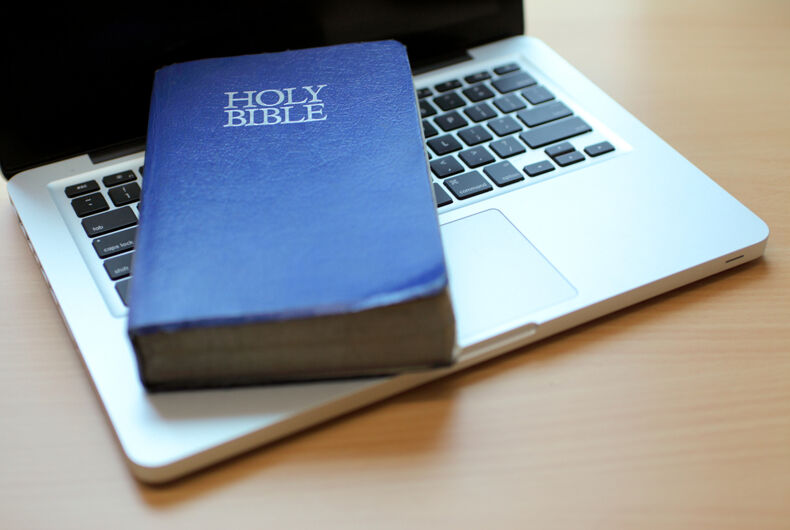 A Christian web designer who was never asked to make a website for any same-sex couple is going to have her lawsuit heard either later this year or next year by the Supreme Court, boding ill for the future of LGBTQ anti-discrimination law.

In 2016, Lorie Smith and her company 303 Creative LLC sued the state of Colorado for banning businesses from discriminating on the basis of sexual orientation because she doesn’t want to make wedding websites for same-sex couples.

Her lawsuit cited Bible verses and said that she “believes that God is calling her to promote and celebrate His design for marriage… between one man and one woman only.” While she works with people who don’t follow her form of Christianity – she has taken work from a Jewish group before – working for same-sex couples would violate her religious beliefs, she argued.

During oral arguments two years ago, the Associated Press reports that Chief Judge Timothy Tymkovich asked Smith if she would accept work from a wedding planner who wanted her to create five websites: four for opposite-sex couples and one for a same-sex couple. Kristen Waggoner – a lawyer for the anti-LGBTQ hate group Alliance Defending Freedom (ADF) who represented Smith – said that she would refuse the entire order.

In a 2-1 decision last year, the panel of judges on the Tenth U.S. Circuit Court of Appeals in Denver ruled that the state of Colorado had a compelling interest to protect the “dignity interests” of oppressed minorities.

While her story is religious in nature, she’s challenging the Colorado anti-discrimination law on free speech grounds, since her job involves putting words on websites.

For many, that might not seem like a violation of her speech rights – web designers take work from companies and people they don’t personally agree with all the time – but she said that the First Amendment means she can’t even be made to copy and paste someone else’s words as part of her business.

And the case could be an opportunity for the Supreme Court to curtail state-level anti-discrimination laws. Six of the nine Supreme Court justices are currently conservative, and this might be the case they will use to rule against LGBTQ equality and limit civil rights measures.

Colorado Attorney General Philip Weiser asked the Supreme Court to refuse to hear Smith’s case, arguing that the Supreme Court has routinely upheld anti-discrimination measures when it comes to businesses that sell goods and services to the public.

“The anti-discrimination law is a straightforward regulation of commercial conduct,” Weiser said.

Editor’s note: A previous version of this article said that there were three conservative justices on the Supreme Court. We regret the error.