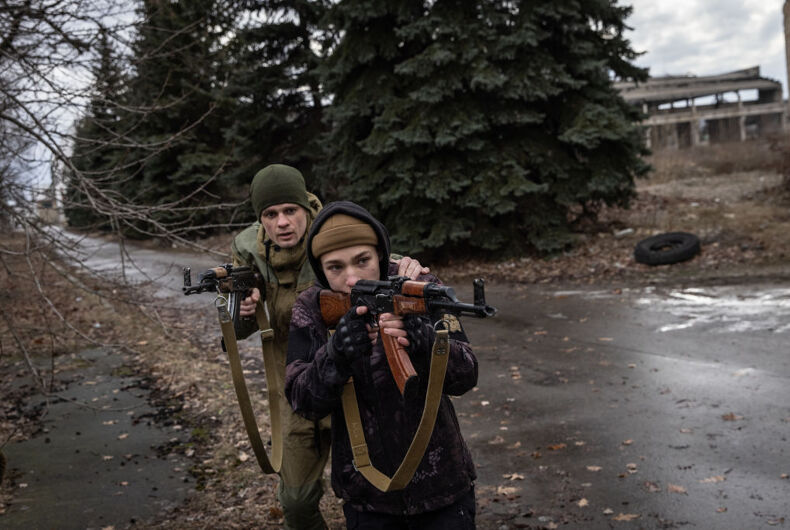 KYIV, UKRAINE - FEBRUARY 19: An instructor guides a civilian (F) during a military training course conducted by a Christian Territorial Defence Unit on February 19, 2022 in Kyiv, Ukraine. Across Ukraine thousands of civilians are participating in such groups to receive basic combat and survival training as the fear of a Russian invasion continues to escalate. Ukrainian President Volodymyr Zelensky travelled to Munich to meet with U.S. Vice President Kamala Harris and other lawmakers at the 2022 Munich Security Conference despite warnings from U.S. officials not to leave the country, the trip comes after U.S. President Joe Biden warned Friday that he believes Russian forces intend to attack Ukraine "in the coming week" or sooner.Photo: Photo by Chris McGrath/Getty Images

The US.. State Department says that Russian authorities have drawn up a list of Ukrainians to execute after invading the country and LGBTQ citizens are on it.

The list also includes politicians and journalists, along with members of religious and ethnic minority groups.

Russia has orchestrated a continued campaign against the LGBTQ community, both inside the country and in areas under this influence. While the West mostly overlooked the imprisonment and torture of gay men and transgender women, the country solidified its grip on religious conservatives and the far right. LGBTQ people have been used as scapegoats for the West.

Bathsheba Nell Crocker, U.S. ambassador to the U.N. office in Geneva, warned the High Commissioner for human rights that “abuses in the aftermath of a further invasion are being planned.”

“These acts, which in past Russian operations have included targeted killings, kidnappings/forced disappearances, unjust detentions, and the use of torture, would likely target those who oppose Russian actions, including Russian and Belarusian dissidents in exile in Ukraine, journalists and anti-corruption activists, and vulnerable populations such as religious and ethnic minorities and LGBTQI+ persons,” Crocker warned in a letter.

“Specifically, we have credible information that indicates Russian forces are creating lists of identified Ukrainians to be killed or sent to camps following a military occupation. We also have credible information that Russian forces will likely use lethal measures to disperse peaceful protests or otherwise counter peaceful exercises of perceived resistance from civilian populations.”

Tensions in the region remain high, with U.S. officials joining European allies as they scramble to deflect Russian President Vladimir Putin’s obsessive ambition to take over the former part of the Soviet Union. Russian troops have entered separatist regions of the country as Putin attempts to spur a war with the West. Shelling between the two sides has continued over the weekend.

Following Putin’s recognition of two breakaway regions as independent and movement of troops into the area as “peacekeeping” forces, President Joe Biden quickly instituted sanctions against businesses, banks, and separatist leaders in the areas. The West has continually warned Russia of “crippling sanctions” if they invade.

“We are always ready for diplomacy,” White House Press Secretary Jen Psaki said in a statement on Sunday. “We are also ready to impose swift and severe consequences should Russia instead choose war. And currently, Russia appears to be continuing preparations for a full-scale assault on Ukraine very soon.”