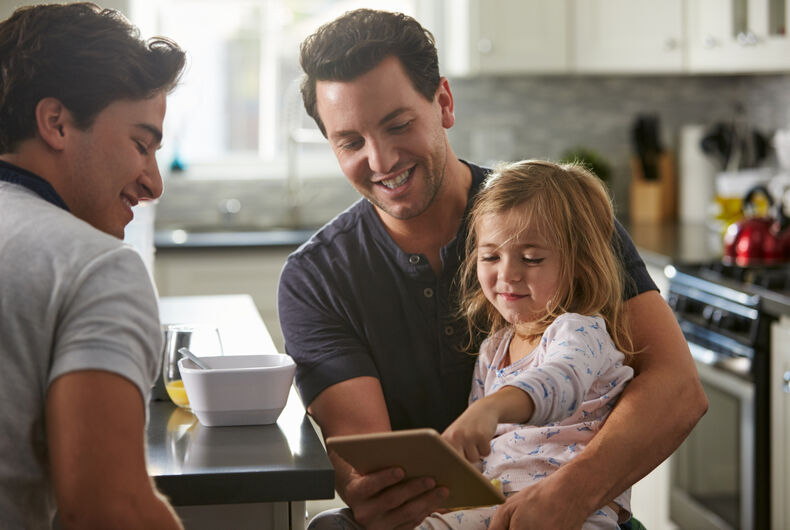 The far-right Daily Wire‘s Ben Shapiro is defending Florida’s Don’t Say Gay bill, and he picked a strange angle: he doesn’t think that children should know that same-sex marriage exists.

Shapiro is known for his catch-phrase, “Facts don’t care about your feelings,” but now he’s arguing that the fact that marriage equality is the law of the land isn’t as important as the uneasy feelings some parents get when they think about LGBTQ people.

Related: Leslie Jordan is shocked to learn what “WAP” means

“Tim Miller demands that he decide how and in what context your 6-year-old child is taught about same-sex marriage,” Shapiro tweeted, referring to a video by Miller about the Don’t Say Gay bill, which would ban teachers in Florida from talking about LGBTQ people.

“Your opinions and your children are of no consequence to him,” Shapiro continued. “And if you don’t let him have his way, he will be very hurt. Because he is the priority, not your kids.”

Tim Miller demands that he decide how and in what context your 6-year-old child is taught about same-sex marriage. Your opinions and your children are of no consequence to him. And if you don't let him have his way, he will be very hurt. Because he is the priority, not your kids.

Commenters on Twitter tore him apart for his Anita Bryant-esque outburst, noting that school children are regularly told that opposite-sex marriage exists – and no one treats that like sex education – and arguing that kids should be taught about different kinds of people and families.

One of my kids IS gay and happily married. His marriage has affected absolutely nobody else.
YOUR opinions are of no consequence but I can't help but think you may be protesting too much about an issue that doesn't impact you in any way.

In your opinion, what is the appropriate age for a child to learn that gay people exist and can get married? Follow-up question, what do you think "teaching about same-sex marriage" even entails and why is it cause for concern, to you? What is the alleged damage to children here?

If gay teachers can't mention their family relationships in class, neither should straight teachers be able to mention theirs. But kind of impossible if teachers have spouses or kids in the same school.

Seeing a teacher or fellow student refer to their partner or parents does nothing to hurt you+your kid unless you’re actively trying to teach your kids to hate LGBTQ people, which yes seeing that gay people aren’t bad might ruin that agenda

You may be unaware of this, but small children don't actually think about sex or sexuality the way people like you want to project onto them. Your problem is that you want to sexualize everything.

My kids were taught about same sex marriage as toddlers when they met our neighbors, popinjay. What ridiculous world do you think you live in? Clearly, you think your feelings & hatred are the priority, not anyone’s kids.

Consider that allowing children to know *being* gay is nothing to be ashamed of would prevent suicides. Parents can help answer further questions in the home. But by implying there is something shameful about it, I can assure you nothing good will come.

Obergefell is older than that kid.
Teaching age appropriate info ("yes, Tommy, your friends two dads are married") about a perfectly legal civil right is part of how kids grapple with the mundane tasks of understanding the world they already inhabit.

It’s really weird that you think that it should be illegal to talk about certain types of people because it hurts a small minorities feelings.

My niece is 6. My 17 year old daughter is gay. My niece understands that my daughter has a girlfriend. Her life is not ruined, she’s made room for different understandings of relationships. You should try it. #inclusivity