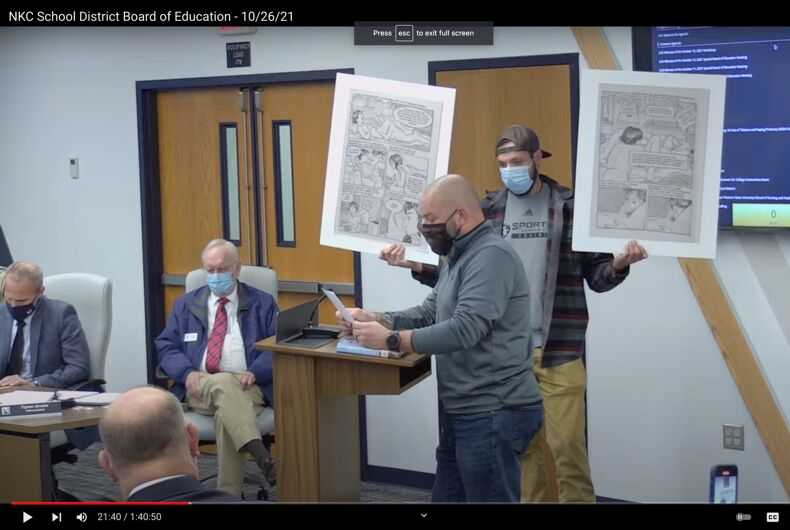 Ryan Utterback holds posters depicting content from Alison Bechdel's "Fun Home" as he advocates to have the book banned at a school board meeting Photo: Screenshot, Youtube

A Missouri man who advocated for the banning of books from schools that contained sexual material has been arrested for child molestation.

According to local news station KMBC, Ryan Utterback, a 29-year-old parent in the North Kansas City School District,  has been accused of inappropriately touching a child under 12-years old in December 2020.

And in September 2020, he allegedly stuck his finger through a hole in a teenager’s pants and began rubbing their leg. The pre-teen told investigators they “didn’t like it at all” and that it felt uncomfortable.

A separate case also accuses Utterback of showing sexual videos to a four-year-old.

He has been charged with second-degree child molestation, as well as furnishing or attempting to furnish pornographic material to a minor.

Yet Utterback recently participated in multiple school board meetings in which he advocated for the banning of certain books, including Alison Bechdel’s bestselling LGBTQ graphic memoir, Fun Home: A Family Tragicomic, on the grounds that they contain sexual material.

At a school board meeting on October 26, 2021, Utterback can be seen on video holding poster boards containing content from the book while the Northland Parent Association President James Richmond spoke out against it.

In November, students protested the banning of books from their school, to which Utterback responded, “I understand their struggles and it’s not lost on me. But again those conversations are to be had at home, Only I have their intimate understanding as to what is and isn’t appreciated for my children.”

Utterback will reportedly appear back in court on March 10.

Editor’s note: A previous version of this article incorrectly stated that Ryan Utterback was from Kansas. We regret the error.

Gay widower got $90,000 for past discrimination due to Biden administration reforms