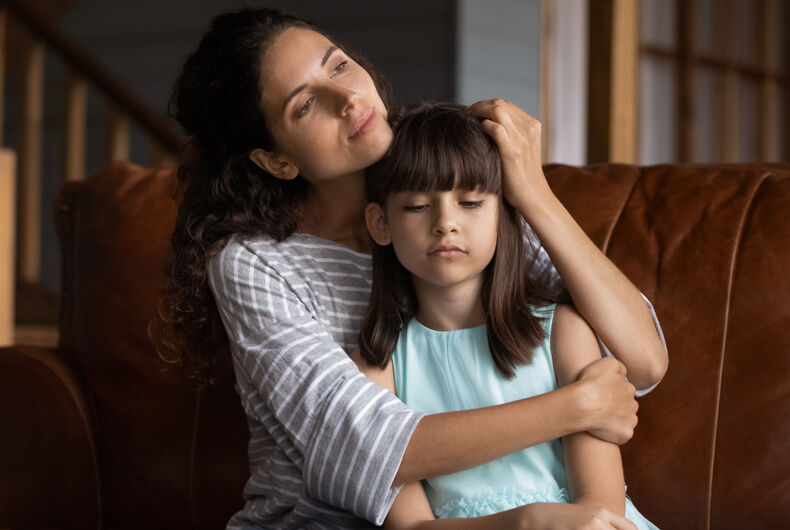 A judge in Oklahoma has issued a temporary order blocking the custody rights of a mom to her child. The reason?

She was not the “gestational parent.”

In the case of a lesbian couple that filed for divorce in December 2021, one of the moms of a young child is having to fight to obtain parental rights. The parent, whose first name is Kris, was denied her parental rights by Judge Lynne McGuire due to not being the biological parent.

In her ruling, Judge McGuire stated that Kris could have pursued any legal remedy to establish parental rights and cited her failure to do as the reason behind denying Kris custody rights to her child.

Judge McGuire also stated in her ruling that Kris could not apply for custody of the child, as the child was not a product of the marriage.

This is all despite the fact the couple planned together to have the child, and both she and the birth mom (named Rebekah) appear on the birth certificate as parents.

According to Nicole McAfee, executive director of Freedom Oklahoma, “A temporary order in a pending case in front of Judge McGuire in Oklahoma County suggests that despite the intentionally planned pregnancy and parenting of a child between two queer parents, both of whom appear on the birth certificate, that the non-gestational parent does not have parental rights because they did not take another expensive and arbitrary step to engage in more legal paperwork in a court system that was never designed with 2SLGBTQ+ people in mind.”

In June, 2019, the Oklahoma Supreme Court ruled that non-biological parents in same-sex relationships can seek to establish custody and visitation rights equal to those of the biological parent. The landmark decision was issued in the case of Schnedler v. Lee, which involved a same-sex couple who had a child together during a 10-year relationship.

When the couple split up, the biological parent, Lee, denied custody and visitation to her former partner, Schnedler, who sued for parental rights. Schnedler lost at the district court and Court of Civil Appeals. The Oklahoma Supreme Court reviewed the case and reversed the rulings of the lower courts, establishing a test by which non-biological parents can establish their parental rights.

However, in the case Guzman v Guzman, the Oklahoma Supreme Court stated that the Schnedler ruling does not apply to legally married couples, meaning that despite the two being married, Kris as the non-biological parent does not have any legal standing to claim custody as her child’s parent, despite the aforementioned fact of her name on the birth certificate and both parents planning conception.

Robyn Hopkins, Kris’ attorney, spoke with the Black Wall Street Times newspaper in Tulsa to share her opinions on the case.

She noted that current Oklahoma law states that any child born within a marriage is legally parented by the married couple, and the child in the current case falls under such circumstances. Nonetheless, the judge refused to recognize the legitimacy of the parents.

Hopkins said that to “require same-sex couples to endure more costs to solidify parental rights places a further burden on the couple, especially the nongestational parent.”

“This is especially egregious when the relationship with the child has not only been established, but the child was created within the marriage, with even more intention than most children born of opposite-sex couples. And the fact that the non-gestational parent is listed on the legally-recognized birth certificate; what else can be asked of a parent?”

This case has now set up a major court challenge impacting the future of LGBTQ families in Oklahoma. Since Schnedler‘s precedent didn’t apply to Guzman and this case, what is the prospective avenue for LGBTQ couples to have children and raise families?

If the court holds and says that Kris has no right to claim custody and parenthood over her child, does that mean every LGBTQ couple that has children via procreation has only one parent unless the other parent files for custody & adoption, despite both parents being involved in the process? Is the only option for the nongestational parent adoption, which can take months to years to finalize, requiring high costs in terms of money?

What if that parent doesn’t have the funding to go through such measures? If so, does that cross the bar of discrimination as stated in the 14th Amendment? Also, what about the birth certificate? If both names were on the birth certificate, why was that not enough to claim both parents could claim custody? What is the definition of a parent? Is parent only a biological idea or is it something more? Can family extend past genetics?

There exists a litany of questions that need to be fulfilled with regards to LGBTQ parenting, and this case will bear a great weight onto many of these questions. Meanwhile, many LGBTQ couples in Oklahoma await an answer, as this impacts the future of their families as well.

“We can firmly say that no 2SLGBTQ+ person should risk losing their child simply because they are not the gestational parent,” McAfee added. “Parents and children alike deserve the certainty that their rights and relationships won’t be rewritten by the courts, just because when given the opportunity, the legal system reverts to heteronormative, ableist definitions of what constitutes a parent.”