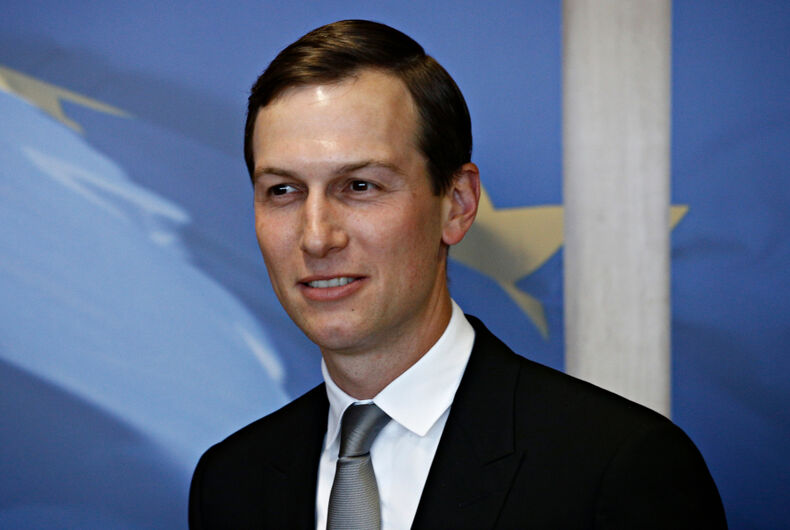 Brussels, Belgium. 4th June 2019. Jared KUSHNER, Special Advisor to the President of the United States is welcomed by European commission President Jean-Claude Juncker ahead of their meeting.Photo: Shutterstock

Jared Kushner, former president Donald Trump’s son-in-law, was awarded a position in the White House through nepotism. But a far-right congressman, Rep. Lee Zeldin (R-NY), is taking Trump’s penchant for favoritism to a whole new level.

He nominated Kushner for the Nobel Peace Prize.

Trump bitterly complained that his arch-nemesis (at the time), President Barack Obama, won the prestigious award. GOP sycophants like Sen. Lindsey Graham (R-SC) repeatedly insisted that Trump should win the prize to curry favor with the temperamental and easily flattered former leader.

But Zeldin, who is running to be the next governor of New York, knows that opportunity is over. Instead, he nominated Kushner for his role in the Abraham Accords.

The negotiations normalized relations between Israel, Sudan, Morocco, Bahrain, and the United Arab Emirates. It was one of the highlights of Trump’s foreign policy.

“The Abraham Accords, signed in 2020, represent the most significant diplomatic breakthrough between Israel and Arab nations in decades,” Zeldin wrote in his nomination, according to The Post.

Anyone can be nominated for the Peace Prize by outsiders. Russian President Vladimir Putin was. Rush Limbaugh was also a nominee. So were Adolf Hitler and Joseph Stalin.

But if the nomination isn’t enough, Zeldon dropped cash at Trump’s doorstep when he held a political fundraiser at Mar-A-Lago last week.