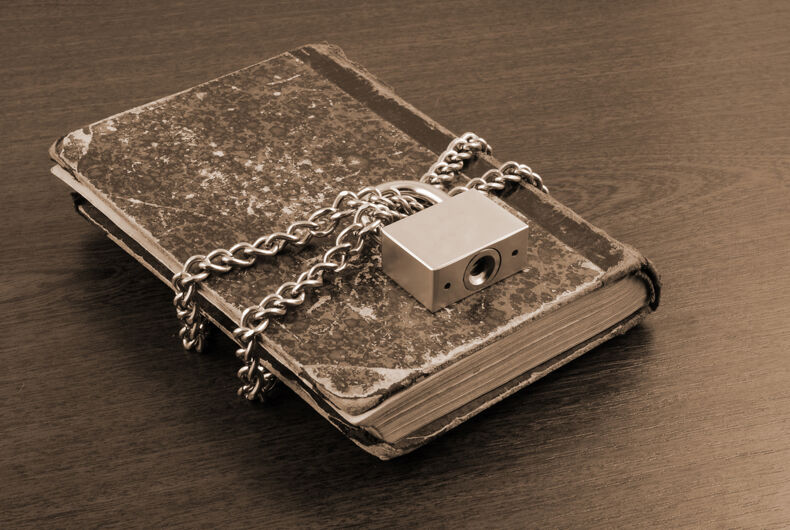 It seems LGBTQ books and books about race are no longer the only ones being challenged in schools. Now some conservatives are just as scandalized by books with depictions of heterosexual sex.

Oklahoma Attorney General John O’Connor is currently reviewing 51 books to determine whether they are in violation of the state’s obscenity law, and his list includes books that have been taught in schools for decades.

Many of the books on the list do celebrate LGBTQ identities, such as Maia Kobabe’s Gender Queer: A Memoir and L.C. Rosen’s Jack of Hearts (And Other Parts), both of which have been challenged across the country. But there are also classics like Of Mice and Men and Lord of the Flies, and more recent bestsellers like The Perks of Being a Wallflower.

O’Connor told The Frontier that he felt compelled to investigate these books after receiving a slew of complaints from parents and conservative groups.

“Well, I think the first thing we have to decide is at what ages are our kids ready for exposure to images that many think are pornographic?” O’Connor said. “And and then we have to also look at things and decide for our community standards what is pornography?”

“Usually if a number of parents are shocked that a given photo or diagram is inappropriate, that should be reviewed and they should look at removing the use of that book or whatever.”

For O’Connor, the most egregious offenses come in the form of visual materials available in certain books, like photos and drawings.

“A lot of the effort seems to be, in some circles it’s considered cool to expose kids to drawings of, say, homosexual sex in a diagram,” he said. “And many parents, including me, disagree with that, whether it’s homosexual or heterosexual sex.”

When it comes to written words, he said they could still be inappropriate even if they are not “pornography.”

O’Connor’s investigation into these 51 books is part of a much larger trend in Oklahoma. Republican lawmakers in the state have introduced at least 10 bills that would place limitations on what books school libraries can carry.

Senate Bill 1142, for example, says school libraries must remove any books with “their primary subject [being] the study of sex, sexual preferences, sexual activity, sexual perversion, sex-based classifications, sexual identity, or gender identity or books that are of a sexual nature that a reasonable parent or legal guardian would want to know of or approve of prior to their child being exposed to it.”

The bill would also allow school to fire staff and fine them $10,000 per day for refusing to remove material that falls under that definition within 30 days of a parent complaint.

“I think there is a move around the country to give parents a little bit more control over what’s given to their children,” Standridge said. “Something that historically parents have always had the final say, but for some reason, over the last few years, schools have eroded that privilege away.”

But the president of the Oklahoma Library Association, Cherity Pennington, said lawmakers should consider actually talking to librarians about how books are chosen for various age groups.

“It’s always concerning to me when people try to make decisions without talking to the trained professionals who are charged with evaluating and developing library collections.”

According to Pennington, there are also already policies in place that allow parents to challenge books.

America is very fat & the rest of the world is getting fatter too. Does it matter?