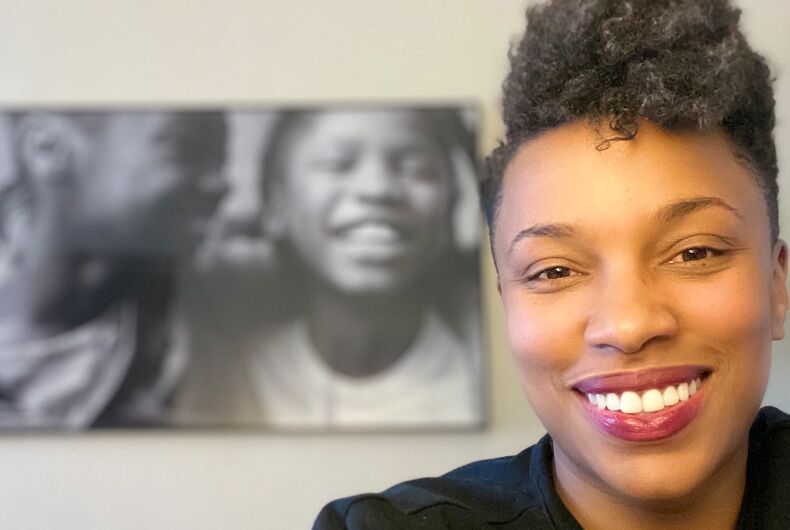 In January, Melanie Willingham-Jaggers became the first Black non-binary executive director of GLSEN, an educational advocacy organization fighting for the safety of LGBTQ students as well as for LGBTQ-inclusive education.

And they’re not taking this history-making role lightly.

“I am striving to pour as much love, strength and support as I can into the next generation,” they told LGBTQ Nation. “Those coming up now are living through the ‘best and worst of times,’ and while I am here, I am motivated to serve and support the youth and community advocates I work with. They’re the ones that keep me striving for the world we need and deserve.”

So proud that @glsen is leading with a national #RainbowLibrary program! Getting books that show and affirm the lives, experiences, communities and histories of all of us. 💜 https://t.co/62nyvRfiPG

For Willingham-Jaggers, pouring themselves into the work means prioritizing intersectionality.

“Queer youth are also people of color, people with disabilities, people who are undocumented, and people with many other marginalized experiences. Our community, our queer community, lives at these intersections of identity and expression and we must recognize and embrace that.”

Doing so, they said, means maintaining strict stances when it comes to policy advocacy. It means always pushing for the protection of the most marginalized groups.

“Compromise isn’t a win if it leaves some of us behind. Either we mean ‘all’ or we don’t,” they said.

Bc it’s never the learner who is falling short…it’s the system that not meeting the learners needs.
💅🏾 https://t.co/7qu9rEpZsJ

While they have big plans for their time at the helm, Willingham-Jaggers also hopes their mere presence as the leader the influential organization will make a difference to LGBTQ youth.

“I hope that the young people I work with see their aspirations and confidence grow when they see that someone who looks like them, comes from a similar background to them, can become a national leader.”

Willingham-Jaggers has taken on this role as vicious attacks on the teaching of LGBTQ content in schools continue to grow.

Conservative parents and politicians across the country have waged war on books featuring LGBTQ identities and are petitioning school boards to ban these books from school libraries. In many cases, they have been successful.

And a bill in Florida that has become known as the “Don’t Say Gay” bill seeks to ban teachers from discussing LGBTQ identities in the classroom at all. Similar bills have also appeared in 15 other state legislatures.

Additionally, legislatures have introduced more than 150 anti-LGBTQ bills in 2022, many of which target trans youth’s access to health care, school facilities, and sports teams.

Willingham-Jaggers called these bills “chilling” and said they send a stark message to LGBTQ youth that they are not safe. GLSEN, they emphasized, is working closely with state chapters, educators, and young people to fight these attacks.

“We’re also pushing on the federal level for proactive policies that ensure nondiscrimination protections and raise the baseline for LGBTQ+ young people’s safety,” they said.

One major goal for Willingham-Jaggers is to continue strengthening the relationship between GLSEN’s 38 local chapters to more effectively create long-term, sustainable change across the country.

“Longstanding systemic inequities in our education system have created a varied patchwork of under-resourced schools without the policies, funding and programs needed to sustain their school communities,” they said.

This lack of resources has led schools to look for what Willingham-Jaggers called “band-aid solutions” to problems as opposed to tackling the root causes of the struggles students endure.

“We must now ask, how can we make schools not only safe at a baseline level, but actively supportive and liberating, for young people?” they said.

Florida Republicans are legislating in ways that are:
Inhumane.
Hateful.
Creating school policies specifically built to harm the most vulnerable kids. https://t.co/jou5DfVkNj

Prior to their time at GLSEN, they were the Program Associate Director of The Worker Institute at Cornell University’s School of Industrial and Labor Relations. They also served as board chair of The Audre Lorde Project, a prominent New York-based LGBTQ community organizing group.

They have dedicated their life to education, they said, because it is “the cornerstone of a functioning, representative democracy.”

“Education should inspire political activism and civic engagement in all of us. For me, that includes labor, racial, gender and disability justice in addition to LGBTQ+ justice. Working in education is a way to touch all of these intersecting issues, because young people are consistently at the forefront of social change.”

For their own passion and determination to fight, Willingham-Jaggers credits the Black women who raised them, from their mother to their grandmother to their sisters.

“The reason I identify as both a Black woman and a non-binary queer person is because Black women are my political home and North Star,” they said.

Beyond those closest to them, they look to the Black women activists, politicians, and organizers who came before them.

“I am also inspired by my political foremothers who dreamt of freedom and pushed for a democracy vast enough to include them and all of us.”