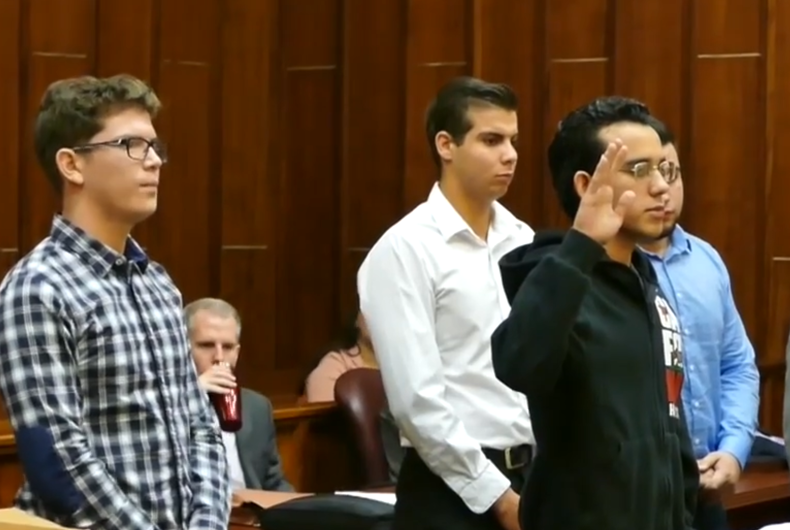 A judge ruled on Friday that four men who viciously beat up two gay men in Florida in 2018 were not acting in self-defense.

The attack took place just after the Miami Beach Gay Pride Parade. Rene Chalarca and Dimitri Lugonov were exiting a restroom in Lumus Park. They said they were holding hands and hugged before the attack began.

Related: A couple was attacked for holding hands at Miami Pride. How police reacted made it worse.

The men also beat Helmut Muller, a bystander who tried to help the couple. He was pushed back onto the pavement and had to get four stitches on the back of his head.

All three victims had to be rushed to the hospital. Chalarca suffered a broken facial bone and lost his job because he was in too much pain to be able to work.

The victims believe that they were attacked because of “the way that we were dressed” and how they looked like they “were together.” The attackers shouted “maricones,” an anti-gay slur in Spanish.

The attackers were later identified as Juan Carlos Lopez, Adonis Diaz, Pablo Romo-Figueroa, and Luis Alonso-Piovet, who all turned themselves in after surveillance video of the brutal beating was released.

They were charged with three counts aggravated battery, as well as with a hate crime.

UPDATE: The 4 subjects have just surrendered @ MBPD through an attorney.

We anticipate felony charges for each of them. https://t.co/OUUKUPd3gl

On Friday, Circuit Judge Ariana Fajardo Orshan decided not to dismiss the attackers’ battery charges based on their claims that they were acting in self-defense under Florida’s controversial “Stand Your Ground” law.

After a three-day hearing, the judge concluded that the video does not show any evidence that the attackers’ safety was at risk.

According to prosecutors, the four men began attacking the couple because Chalarca accidentally brushed against Lopez as he was coming out of the bathroom.

“They are not entitled to immunity because of a casual brush of the shoulder,” said prosecutor Justin Funck, according to the Miami Herald.

While the judge ruled against the men’s self-defense argument, it is still possible for them to use it in a jury trial down the road.

The attack gained significant attention back in 2018.

Shockingly, the four men were even honored in 2019 at a big money gala for a local LGBTQ organization after the executive director claimed they had been “wrongly accused.”

Juan Lopez’s father also came to his defense, saying that his son couldn’t have committed a hate crime because he grew up with gay dads.

It is time to start celebrating Black asexuality in media