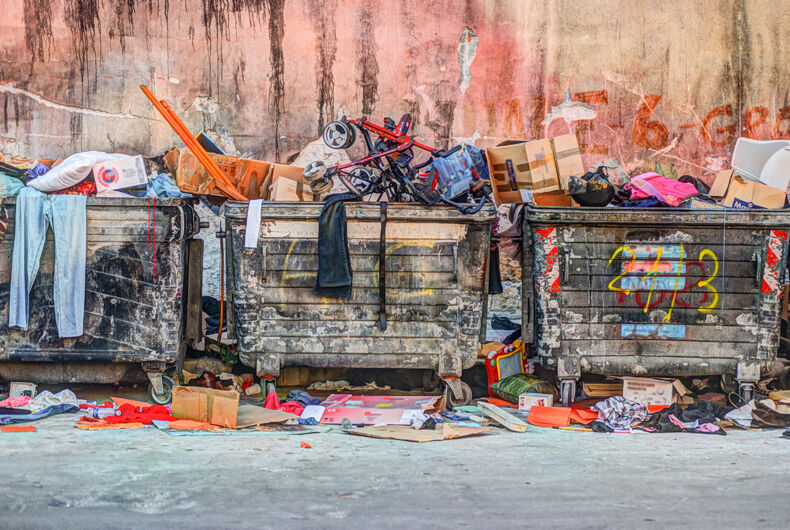 What’s the best place to meet the writer and filmmaker who’s known as the Pope of Trash and who directed a cult classic about the Filthiest People Alive?

At the town dump, of course!

This summer, 10 lucky bidders will get to spend an evening with the director of Hairspray, Serial Mom, Cry-Baby, and Pink Flamingos, which was just added to the National Film Registry.

The dinner is being described as a “dumpster dive meal” from local markets, prepared by Chef Jake Hetnarski, formerly of Prune NYC. It will be served on “custom damaged plates” from artist John Derian, along with “dead flower arrangements” by Garden Renovations Nursery of Provincetown, all within the confines of the Provincetown Dump, kept open extra late for the one-night-only occasion.

“Regardless of your culinary sense of adventure, we can promise you’ve never had a dinner like this,” the film society teases on its website. “How can you resist?”

Though he lives in Baltimore, Waters has spent every summer since 1964 in Provincetown and is a big supporter of the film society. Last year, he raised $17,000 for it by leading a tour of sex haunts in Provincetown, including a visit to Dick Dock, the waterfront cruising spot that’s been called “one of the most frequented and sanctioned gay cruising areas in the world.”

After the success of last year’s event, the film society asked what he could donate for 2022. Waters, 75, said he didn’t want to repeat himself with another Dick Dock tour: “I did it once. A joke never works twice.” Instead, he suggested dinner at the dump.

“I think it’s going to be a glamourous night in the dump,” he said in a phone interview. “I always love a dump. I used to go to the dump in Provincetown and find stuff all the time. I even found a bicycle there once.”

Who eats at the dump?

“No one does,” he said. “That’s the novelty of it. We’re setting up an extremely formal table with John Derian — he’s doing all the broken place settings — and a chef from Prune, one of my favorite restaurants in New York that’s now gone. He’s going to dumpster-dive in all the supermarkets and find all the stuff to make the meal. I’m going to have dead flowers from Garden Renovations. It’s going to be in the spirit of the thing. It will be a dumpster evening.”

The date will be either July 18, 19, or 20 – high season for the town that’s become a popular destination for LGBTQ vacationers.  The auction website shows three lots with two tickets each and four single tickets up for bid. The winners will all dine on the same night, with Waters as the host. The date will be firmed up once the bidders are identified and contacted, so people can coordinate their schedules and make travel arrangements if necessary.  All bidders for this item must be over 21 and are expected to follow public health protocols to prevent the spread of COVID-19.

What does one wear for dinner at the dump? Do they dress up as a character from a John Waters movie? Rags from a cleaning bin?

“A good thrift shop outfit, I would think,” Waters said. “The two best thrift shops are Ruthie’s and the one in the church [Provincetown United Methodist Church] on Shank Painter Road. Both of those would probably be a place to buy an outfit.”

Given that Waters is known for his Trash Trilogy – Pink Flamingos, Female Trouble and Desperate Living, which features an entire town made out of recycled trash, “it’s not out of character,” the filmmaker said. “We’re making it elegant, but it’s going to be at the dump…I think it’ll be a fun night.”

The virtual auction went live on February 2 with 120 lots in a wide range of categories, and it ends on February 13 at 11:59 p.m. All proceeds will benefit the Provincetown Film Society, a non-profit arts organization that produces the annual Provincetown International Film Festival and other activities and is a strong advocate for gender, racial and LGBTQ representation in film.