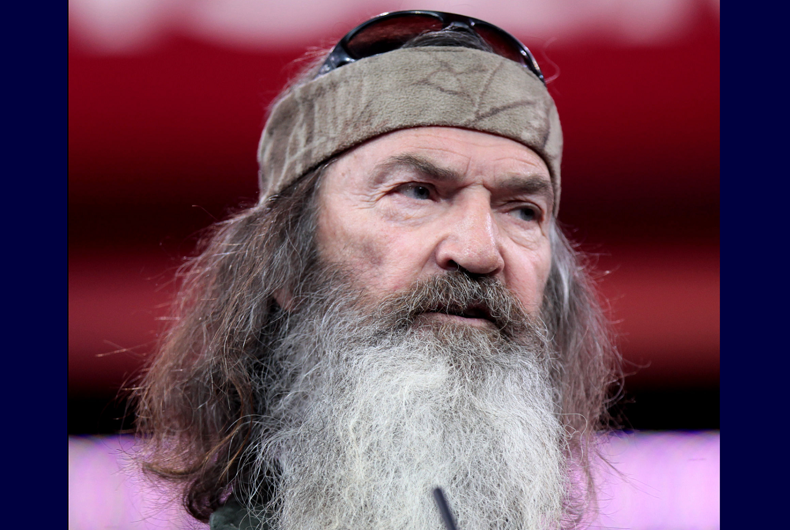 Phil Robertson, the reality television personality who starred on the A&E show Duck Dynasty, is most famous for extreme anti-LGBTQ comments he made in 2013, which resulted in him getting suspended from the show for nine days.

And he wants the world to know that he’s still mad that people disagreed with him a decade ago.

Related: Trump is bestowing prestigious appointments on his most extreme & anti-LGBTQ supporters

“It seems like, to me, a vagina — as a man — would be more desirable than a man’s anus,” he said, adding that the Bible says in Corinthians that “homosexual offenders… won’t inherit the kingdom of God.”

He was suspended from the show and his supporters circulated a petition saying that his freedom of speech had been violated. A&E lifted the suspension before any episode was affected.

In 2015, Robertson was back to hating gay people, saying that straight, married couples are “not going to get chlamydia, and gonorrhea, and syphilis, and AIDS.”

“Either it’s the wildest coincidence ever that horrible diseases follow immoral conduct, or, it’s God saying, ‘There’s a penalty for that kind of conduct.’ I’m leaning toward there’s a penalty toward it.”

In an interview with Fox News this week, Robertson said he has “no regrets” for his comments, but he complained that the media “made a mockery of what I said.”

“All I did was quote a Bible verse,” he said, even though it’s not clear what Bible verse discusses the desirability of various genitalia.

“I quoted a Bible verse that dealt with homosexual behavior,” he said. “I didn’t dream it off the top of my head. It didn’t go any further than that.”

“And as a result, they tried to cancel me. But it didn’t cancel me at all.”

While Robertson says he isn’t angry about the whole thing – the “Bible teaches us to love thy neighbor even with their mistakes” – he hasn’t let go of his biggest claim to fame. The title of his new book is Uncanceled: Finding Meaning and Peace in a Culture of Accusations, Shame, and Condemnation, which makes it seem like not much else has been going on in the 75-year-old’s life this past decade.

“The people that fuel cancel culture just want to find your mistakes and elevate them,” Robertson said, even though he is using that controversy to elevate himself back into the limelight. “That’s what people do. They find a mistake you made when you were 18 years old or something you said on the internet long ago.”