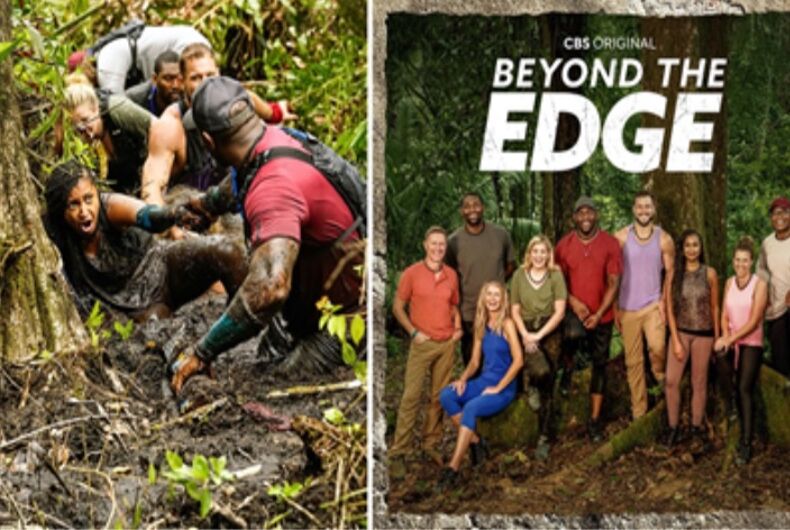 Three years after he starred in Season 23 of The Bachelor, and three months after he revealed another side of himself in Coming Out Colton, Underwood has signed up to compete in a new CBS reality show that’s been dubbed “Celebrity Survivor.”

Related: Madame came to the Antiques Roadshow & she was just as popular as ever

Known as the only lead in the Bachelor franchise to come out as gay, Underwood is one of nine celebrities – and apparently the token LGBTQ representative – to be the first contestants on Beyond the Edge. It airs beginning March 16.

This isn’t a program where Underwood learns about edging, as some might think, and Gus Kenworthy won’t be tagging along.

According to the network, it’s a program in which contestants trade “their worlds of luxury to live in the dangerous jungles of Panama, where they will face off in epic adventures and endure the most brutal conditions, as they push themselves to go far beyond their comfort zone.”

Instead of vying to win money for themselves and their families the way players do on Survivor, the contestants on Beyond the Edge compete as teams to raise funds for a charity of their choice.

The charity that Underwood chose is the Colton Underwood Legacy Foundation, which he launched in 2016 to raise money for cystic fibrosis research and medical equipment after a cousin of his was diagnosed with the disease.

A teaser released by CBS this month shows Underwood and others running, paddling a canoe, climbing a rope ladder, and crawling through mud in the “unforgiving” jungle where they “tested themselves” for two weeks.

“We’re all…a little bit terrified of what’s ahead of us,” he says in the preview.

For some time CBS executives have wanted to capitalize on the success of Survivor by creating another show with players enduring physical and mental challenges in exotic locales, but this time featuring celebrities that viewers at home already know and presumably want to watch. The formula has proven successful in shows such as Celebrity Big Brother and Dancing with the Stars in the U. S. and I’m a Celebrity, Get Me Out of Here in England.

On Beyond the Edge, there won’t be any judges or juries or blindside eliminations. But at any point, participants can ring a bell that indicates they’ve had enough and want to quit. At the end of 14 days, the top two earners will compete in one final challenge, with the winner getting named the show’s first champion and taking home the money for his or her charity.

The host is Canadian sports announcer and commentator Mauro Ranallo. According to Variety and TMZ, the show was filmed last fall in Bocas del Toro, Panama.

A native of Indiana, Underwood, 30, has a background in both sports and entertainment. He played college football for Illinois State University, was signed by the San Diego Chargers as a free agent in 2014, and was on the practice squads of the Philadelphia Eagles and the Oakland Raiders.

After he was released by the Raiders, Underwood was cast on the 14th season of ABC’s The Bachelorette and Season 5 of Bachelor in Paradise. He was then chosen to be the lead in the 23rdseason of The Bachelor, which aired beginning in January 2019.

On April 14, 2021, Underwood announced on Good Morning America that he was gay, in an interview with Robin Roberts. Shortly afterward, Variety and others reported that he was filming a series for Netflix about coming to terms with his sexuality, called Coming Out Colton. It premiered in December, with Underwood meeting gay personalities such as Kenworthy, Michael Sam and CMT Hot Twenty host Cody Alan.

Even aside from appearing on The Bachelor and then declaring he’s gay, Underwood’s time in the spotlight has been controversial.

After testing positive for COVID-19 in the spring of 2020, he reportedly attributed his recovery in part to treatment with hydroxychloroquine, even though most medical experts said it was ineffective in treating COVID and shouldn’t be used for that purpose.

In September of 2020, one of the women Underwood met on The Bachelor, Cassie Randolph, sought a restraining order against him. Randolph said he stalked her outside her apartment in Los Angeles and at her parents’ house, harassed her with anonymous text messages, and put a tracking device on her car. A judge granted a temporary restraining order and a hearing was held in the following month, prompting some to raise questions about the amount of publicity he should get.

Underwood isn’t the only Beyond the Edge contestant with controversy in his past.

Lewis played his entire 17-year NFL career with the Ravens (1996 to 2012) and is considered by many to be one of the greatest defensive players in NFL history. But in 2000, he pleaded guilty to obstruction of justice in connection with the stabbing deaths of two men in Atlanta that year. The charge was later reduced to a misdemeanor in a plea deal after he agreed to testify against two others.

Lewis was sentenced to 12 months probation and fined $250,000 by the NFL, but his image recovered. In 2014, the Ravens unveiled a statue of him in front of M&T Bank Stadium, and in 2018 he was selected to the Pro Football Hall of Fame in his first year of eligibility.

Lewis has appeared in TV ads for The NFL Network, Reebok, Old Spice, and Under Armour, among others. He has also been involved in charitable activities and organizations such as the Ray Lewis Power52 Foundation, a nonprofit that he started to provide personal and economic assistance to disadvantaged youths.

For Beyond the Edge, CBS says “nearly three quarters of a million dollars is on the line” in what executive producer Greg Goldman calls “the most extreme celebrity format ever attempted.”

The day before principal photography began, “all of the producers looked at each other with the sinking feeling that this celebrity cast might see where they were living for up to two weeks – the harsh jungles of Panama – and just bolt,” Goldman recalled in CBS’s announcement of the show.

“To the contrary, we were amazed by how these icons pushed themselves to their breaking points, showing incredible mental fortitude and physical tenacity. And all for an incredible cause: To raise money for charities that are near and dear to their hearts.”

“Why would they do this? It’s much easier to write a check,” Ranallo asks in one of the previews. “It’s because this group of celebrities share a common mission: To prove if we all work together, we can accomplish anything for the greater good.”

Although many on social media seem excited about the new show, not everyone is happy that Underwood’s on it.

“Why did you cast that stalker freak Colton” asked aytota2 (@aytotea0) “I refuse to watch anything with Colton on it after he stalked cassie,” tweeted HYPHEN (@levans36.)

The first episode will air at 9 p.m. ET/PT on March 16, right after Survivor. Episodes will also be available to stream on Paramount+.

We’re pushing limits with one of the most intense celebrity adventure challenges EVER attempted. The new reality series #BeyondTheEdge comes to CBS on March 16. pic.twitter.com/22KhMNZgMd