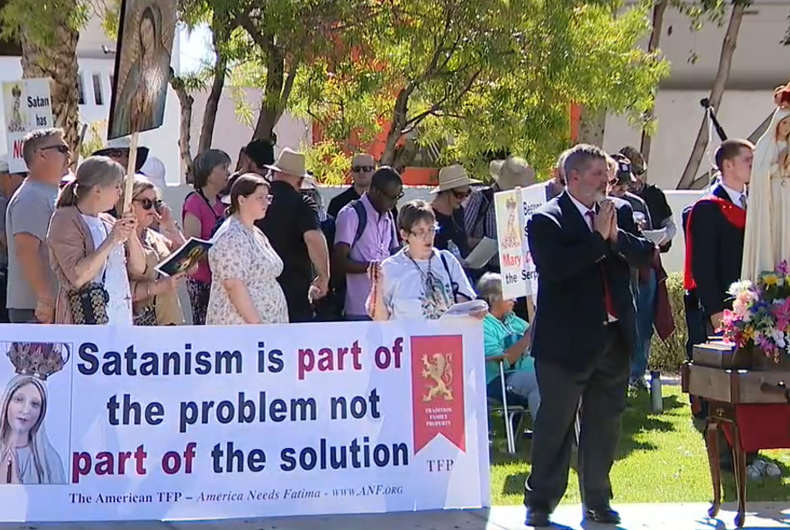 The Satanic Temple held a convention over the weekend in Arizona, and Christian conservatives took a break from demanding religious exemptions to the law and arguing that refusing to spend money at businesses is “cancel culture” to protest the convention, call for a boycott of the hotel hosting it, and argue that the government should shut it down.

The Satanic Temple isn’t a religion in the sense of having a set of beliefs that it imposes on followers. Instead, it’s a group of people who organize as a religion and use humor to “highlight religious hypocrisy and encroachment on religious freedom.”

And Satancon, which 350 people attended in Scottsdale from February 11 to 13, did just that. Turning Point America founder and rightwing pundit Charlie Kirk argued that the First Amendment doesn’t protect Satanists. Since the convention was held on private property, he appeared to be calling for government intervention to shut it down.

“Satan Conferences should not be protected by the First Amendment,” Kirk wrote. “Satan Worship is not what the Founders had in mind when they referenced the ‘fruits of liberty.'”

Satan Conferences should not be protected by the First Amendment. Satan Worship is not what the Founders had in mind when they referenced the "fruits of liberty"

Satanic Temple co-founder Lucien Greaves pointed out that Kirk usually considers himself an advocate of free speech. But it appears that his point of view changes as a function of what is being said.

Backstage Trump groupie Charlie Kirk, a self-described Free Speech advocate, said, re: SatanCon:
"I, for one, want to be part of a group of people that literally drives Satan out of Phoenix and out of Arizona and I hope you'll all join us" @charliekirk11https://t.co/OI3lukFIX5 pic.twitter.com/MQRNcZQBXk

Many people showed up to protest the convention in person.

GOP candidate Jan Dubauskas promoted a “prayer vigil” in response to the convention.

“SatanCon will esppuse [sic] abortion as a religious right and raising children in a Satanic household,” she said, as if the government should be telling parents what religion to raise their children in. “We cannot stand politely aside!”

Join us for a SatanCon prayer vigil on Friday. 🙏🇺🇲❤

SatanCon will esppuse abortion as a religious right and raising children in a Satanic household.

We cannot stand politely aside! Join us to pray for our city and these lost souls! 🇺🇲🙏🇺🇲 @packamerica pic.twitter.com/FHbsWKEHUu

One protestor called for a boycott – er, “bocott” – of the Saguaro Hotel for hosting the convention.

Concerned citizen calls for "BOCOTT" of the Saguaro Hotel in Scottsdale for hosting SatanCon 2022. pic.twitter.com/jHkNGF8ZNH

She later fixed her sign so that people would understand that she is trying to get a hotel canceled just for hosting an event.

Another protestor tried to explain that Satanism is misogyny because of vaccines and abortion.

Breaking: Concerned Citizen Asked To Move Along Through Wendy's Drive-Thru After Repeatedly Attempting To Order A "BOYCOTT!!!!!!!!!!" of the SatanCon-Hosting Saguaro Hotel in Scottsdale. pic.twitter.com/NQZ5cuVVs4

The Satanic Temple lost a lawsuit in 2018 after it sued for religious discrimination because it was barred from delivering an invocation before the Scottsdale, Arizona City Council, like other religions are allowed to do. The official reason the city gave for turning away the Satanic Temple was that it has no ties to Scottsdale.

“It’s fine that they will be here, and that’s certainly well within everybody’s rights,” former Scottsdale Mayor Jim Lane (R) said when Satancon was announced last year. “We consider ourselves a very inclusive community.”