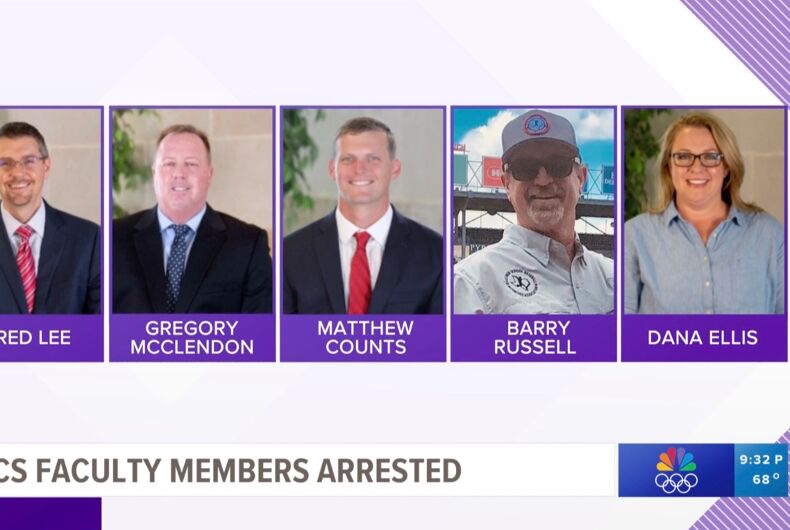 Five staff members at a Christian school in Texas have been arrested for failing to report the sexual assault of a student.

A student at Midland Christian School told the Children’s Advocacy Center that he was changing in the locker room during baseball practice when the lights turned out and multiple students appeared.

Related: An antivaxxer shouted slurs at a teenager outside of school. She’s getting what she deserves.

He said they told him it was “freshman initiation day” and began hitting him and screaming at him before sexually assaulting him with a bat.

When police began investigating the incident, it became clear that the five staff members knew about the assault almost immediately after it happened, NewsWest9 reports.

Dana Ellis, the secondary principal, told police she had informed the superintendent, Jared Lee, about the attack. Lee then reportedly told Matthew Counts, a coach and assistant principal, and Gregory McClendon, the athletic director and football coach, to look into it.

When police began investigating, Lee allegedly refused to provide the police with any paperwork about it until they had a search warrant. After obtaining a warrant, police found documentation had only been created a few days earlier, even though the assault had taken place about a month before.

Parents told Nextstar that the attack was captured on video, and the arrests came about after it began circulating on social media.

In a statement, Jason Stockstill, the school’s Board of Trustees president, said that “Our school officials have, and will continue to, cooperate with law enforcement and their investigation.  Currently, we have qualified acting administrators to supervise the campus, oversee student activities, support faculty, and maintain the day-to-day operation of the school.”

The five arrested staff members have been released from jail on personal recognizance bonds, which do not require paying any money but rather a sworn statement that they will appear in court.

Failing to report abuse is considered a misdemeanor, but it becomes a felony if there was intent to cover it up. In this case, the staff members have been accused of exactly that.

Police also said one student has been arrested.