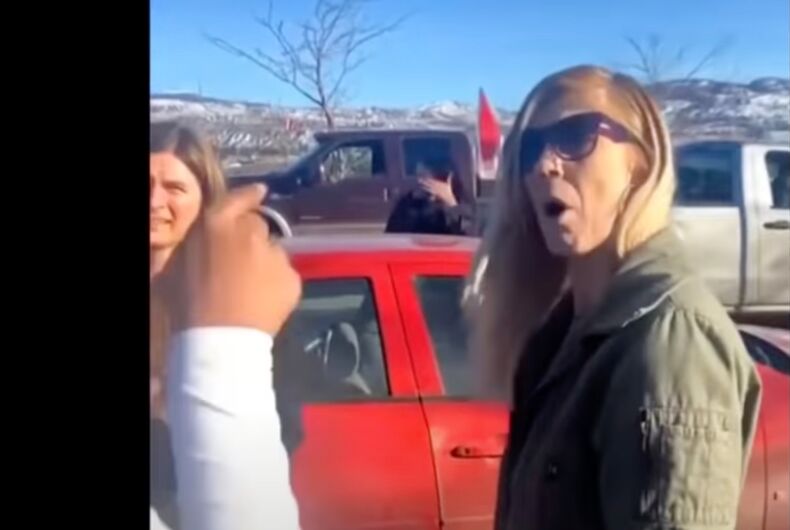 A woman who went viral for shouting slurs while protesting Covid-19 restrictions outside a Canadian high school has been fined $2,300.

Silke Schulze can be seen in a video screaming in the face of teenage student of color outside Southern Okanagan Secondary School in Oliver, B.C.

“I have a fucking right to be in this country, do you?” Schulze shouts.

“Are you telling me to go back home?” the student yells back.

Schulze also screamed a sexist slur at the student, as another student yelled back, “You’re literally arguing with children.”

After being identified, Schulze received the fine for violating the Access to Services Covid-19 Vaccination Act, which prohibits the disruption of access to roads within 20 meters of K-12 schools, hospitals, and COVID-19 clinics.

Schulze was part of a larger group of protestors violating these terms, according to Radio-Canada.

The group was there to support 10 students who had planned a walkout to protest mask mandates. The adult protestors stayed put even after an officer informed them they were violating the law.

Both police and school officials are being criticized for not stopping the protestors. The district superintendent, Beverly Young, said staff believed everything was taken care of when they saw a police officer speaking to the protestors, but the officer was ultimately called to another incident.

Staff didn’t realize there were no officers present when school ended and students left for the day.

That’s when a group of students went over to the protestors to find out what was going on.

Young said staff ultimately intervened but did not call the police.

Student Kai Allen said she doesn’t understand why protestors were allowed there in the first place and why the focus was on keeping students away from protestors rather than getting the protestors to leave.

Young is taking no responsibility for what happened, though, saying it is entirely the fault of the protestors.

According to CityNews, Schulze may also face criminal charges.

Compulsory heterosexuality: What is comphet & why should we care?