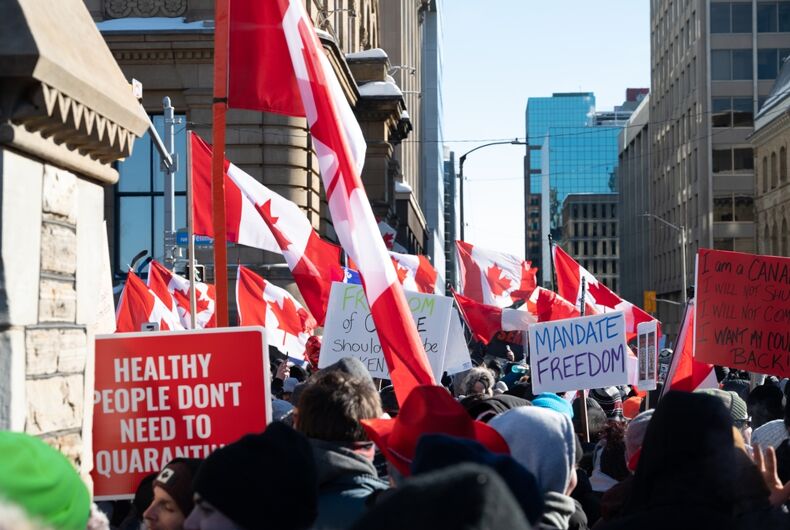 Ottawa residents are being subjected to diesel fumes, noise, and racist, homophobic, and transphobic slurs as anti-vaxx protestors wielding hate symbols and calling themselves the “Freedom Convoy” continue to occupy Canada’s capitol to protest vaccine mandates and other COVID-19 prevention measures.

Resident Kevin Nielsen said that he has heard quite a few homophobic slurs – generally shouted at others – from the truckers occupying his city, giving him “a general sense of terror.”

Related: Ex-college student is sent to prison after coming out to try proving he’s not a neo-Nazi

“I was constantly on high alert,” he told CBC News. “It had a large impact on my mental health.”

“I was shoved, screamed at, called [sexist and homophobic slurs], and had three large men try to pen me in and physically block my way, because I was wearing a mask,” a woman who was not named said.

Others said that the truckers are scaring them with racist and anti-Semitic slurs as well as symbols of hatred. Arushana, who didn’t want her last name published out of fear for her safety, said that at first the protests meant she couldn’t sleep because of the honking all night and the fireworks aimed at her home.

And then she saw a Confederate flag, which is a symbol of white supremacy, especially when used outside the U.S.

“I broke down,” she said. “As a first generation immigrant child, seeing such hatred, especially when my parents came to this country to provide me and my sister with a better opportunity and a better life… I didn’t feel safe.”

“I am a brown woman and I am also incredibly scared of the occupiers. It infuriates me that people seem to be more upset about the war memorial than Nazi flags, Confederate flags and Trump flags being brandished about,” an unnamed woman said. “I have lived in Ottawa my whole life and… this is the first time in my life that I don’t feel safe enough to [walk around].”

Many residents of Ottawa have fled the city after the Freedom Convoy protests started on January 22. “This is a siege, not a protest,” another resident said. “And it is non-stop harassment.”

That resident said that her family is siding with the protestors, but they don’t live in Ottawa. “It is heartbreaking that as I am going through this trauma, I have family trying to defend the protest to me.”